Chinese companies endangered on US stock market! Trump at the center again…

A drop in equities this week comes from heavy news from headlines out of the US/China trade talks and Trump’s escapades. Trump started off early in the week with his statement at the UN going after China and keeping a hawkish foreign policy stance. Trump was not out of the news just yet from the beginning of the week, there were impeachment talks as whistleblowers came forth against the POTUS. The impeachment process was formally initiated by Pelosi mid-week.

This caused markets to dump lower and test lows throughout the week as the S&P 500 slid 1% from the 3000 area, as we attempted to get to all-time highs yet again. There was positivity from the trade talks throughout the week which kept the market afloat for the most part. Then came the news on Friday which pretty much killed a lot of future negotiation just before a truce between the nations. Read more about it below!

Throughout the week a lot of the news out of the Whitehouse was centered around Trump’s potential impeachment, could there be 2020 election tampering? Trump is under the microscope again as he asked Ukranian President Zelensky to look into the investigation of Biden’s son. Although tapes were released, there is no firm consensus of the validity of it all. Prompting Nancy Pelosi to issue a potential impeachment. The tape released was civil with no threats from President Trump. The focus quickly shifted from the impeachment noise to trade optimism then into Friday more trade news took the market into market lows for the week.

Last week this time, it looked iffy for the trade deal as China canceled its trip to Montana and Nebraska. Bloomberg this past Friday reported that Trump and his administration was looking to limit American investing in Chinese stocks and companies by delisting a lot of Chinese companies from American exchanges. This would limit the exposure to the Asian market through government pension funds which caused panic selling in the market. Big market cap companies like Ali Baba (BABA) and Baidu (BIDU) got beat up on the news. Traders and Investors thought this was just another Trump blurt, but its actually bad, very bad. Trade talks could be over for months to come and there may be retaliation from China. What is that? Dump all of its US Treasury holdings. Chinese rhetoric was less bellicose, and there were reports that China was stepping up purchases of US commodities. Now we have to decide if this is a real threat or is it just another bluff to get the upper hand in the trade deal.

Busy economic week ahead in terms of news. There is news everywhere as we edge into the month of October and anticipate more volatility and movement in the market. Especially with all the recent tape bombs out of the US and Trump. US data comes out at the end of the week to close it down.

Tuesday, Australia’s Cash rate, and rate statement, RBA Gov Lowe speaks to wrap it up out of the land down under. Canadian GDP numbers released too and the US ISM Manufacturing PMI.

Wednesday, ADP non-farm numbers and crude oil inventories out of the US.

Thursday, ISM non-Manufacturing PMI and retail out of the US and Retail Sales out of Australia.

Friday, Trade balance out of Canada and the rest of the data during the day is out of the US. Jobs numbers Friday, Average Hourly Earnings, Non-farm employment Change, and the Unemployment Rate. The day concludes with Fed Chair Powell’s speech. 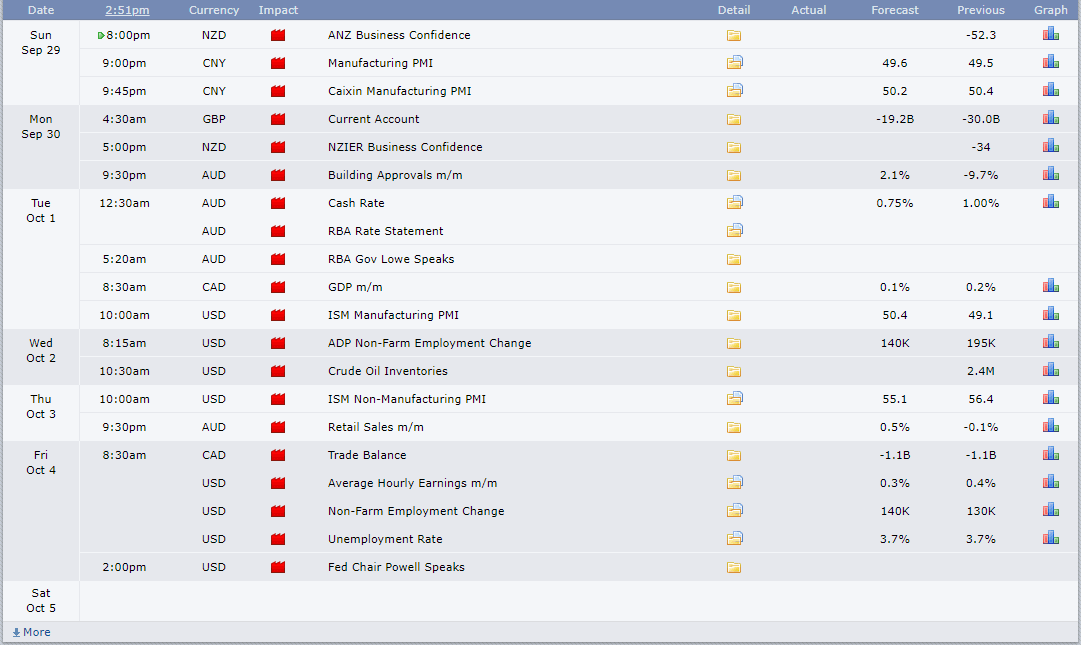