Throughout 2020 and 2021 we saw a quick collapse in the US and global markets due to the COVID-19 pandemic which was quickly fought off by the Federal Reserve prompting a low-interest rate environment along with quantitative easing which prompted a strong rally in the stock market. Also an increase in inflation.

The effects of the change in monetary policy are being felt in the markets in 2022 drastically. The Federal Reserve is changing monetary policy to tightening the money supply and fight inflation which is done by changes in rates and Treasury bill holdings.

Throughout this article we’ll dive deeper into what these things mean and what they will mean for the stock market in the coming years, stretching to 2023. We’ll be breaking down the following topics:

What Is an Interest Rate?

An interest rate simply put is the charge on a borrower’s debt repayment as a percentage over a predetermined period of time. Whether it’s a bank loan for car, house or any business loan. Loans are all based on different rates and over different periods of time.

If I take out a mortgage which is a longer loan usually around 25-30 years, I will have a principal to repay, however, this loan isn’t free!

As the borrower, I will have to pay the interest rate which could be 2.5% or 5% annually on top of the repayment of the principal. A rate can also be associated with the percentage a bank will pay individuals that hold money in savings accounts in that bank.

Naturally, they won’t be comparable to the rates that the banks charge individuals for borrowing.

The main rate is set by central banks and their monetary policy, all other rates are usually byproducts of that rate. The US has two entities, the Federal Funds rate and the Federal Discount rate.

There are many rates in the economic system and understanding how they are affected by different factors can help investors make more informed decisions about the stock market and even day-to-day activities.

The Fed’s Funds Rate & The FOMC

The FOMC is the Federal Open Market Committee which consists of multiple members and bank presidents that come together to gauge the monetary policy in the US and change interest rates accordingly affecting the money supply of the system through interest rates and through asset purchases. Currently, the FOMC is lead by chairman Jerome Powell.

One of the main goals in the Fed (Federal Reserve) is the change the federal funds rate to control inflation, which has been one of the largest issues in 2022.

The Fed can decrease or increase the funds rate which will affect asset purchasing.

The Federal Reserve also has a balance sheet where they can purchase assets or let them expire. This is how they control quantitative tightening or quantitative easing. The Federal Reserve will purchase treasury securities when they want to inject money into the economy and market, so the change in rates isn’t the only thing that they have at its disposal when affecting money supply.

Below is the historical balance sheet held by the Fed, you can see during the COVID-19 crash we had historical asset buying.

Prompting the large balance sheet ever. This is presented in trillions of dollars. We peaked at around $9Trillion before the Federal Reserve allowed T-securities to expire and pull money out of the markets.

There is a turnaround currently at a slow pace. This is an attempt to fight inflation. 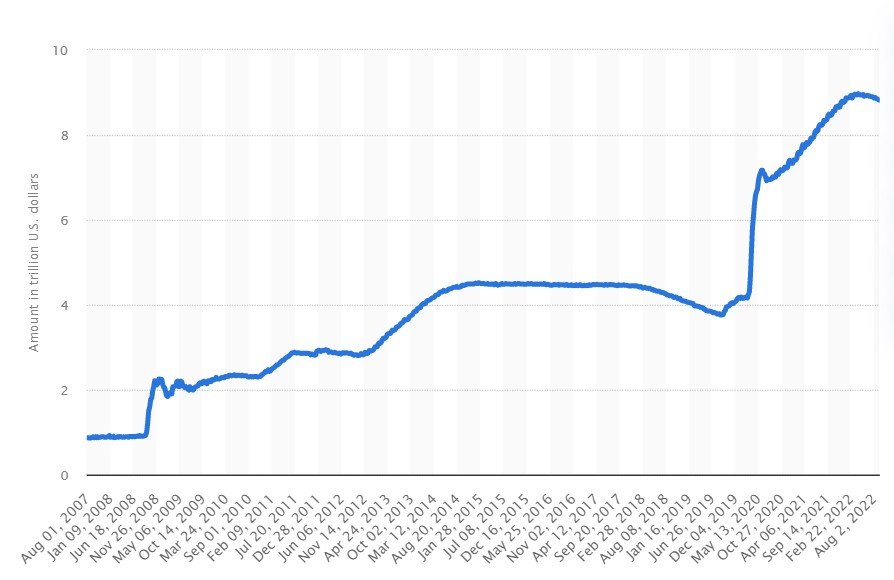 In 2022, inflation was a huge factor that the Federal Reserve aimed to fight and subdue. A huge factor in this was due to the expanded balance sheet held by the Fed and the historically low rates. So much money was injected into the economy that prices for EVERYTHING were inflated.

Below is a charge of historical inflation in the US, you can see we are still not at all-time highs but nearing 10% overall is a drastic change from the Fed’s target of 2%. This is where the Fed comes in to change monetary policy to subdue this.

This has happened several times this year alone hiking multiple 0.75% hikes which hasn’t happened in nearly 30 years. This will cause less spending in the economy and a slow down in inflation. Theoretically.

What Happens When Interest Rates Increase?

Rising interest rates are prompted by the Federal Reserve. The committee will increase the discount rate which causes an immediate jump in short-term borrowing costs for financial institutions. This then trickles into all borrowing costs in the economy, consumers and businesses.

If rates increase, the cost of borrowing will increase, which trickles to the consumer, the financial institutions will increase their rates, charging individuals more for the loans that they take out.

The Feds rate won’t ever be the rate that consumers are charged, there is a spread that the financial institutions will take as profit. This will impact credit cards, mortgage rates, and other loans.

Especially if you have variable rates they’ll be extremely affected which is one of the biggest qualms of 2022 in the quickly rising rate environment. This will cause a decrease in borrowing and consumer spending.

Bills are everlasting, as they increase, households decrease their disposable income, which trickles into the economy. Less discretionary spending affects business revenues and profits decrease. Earnings drop and this moves the stock market.

What Happens When Interest Rates Decrease?

Falling interest rates have the opposite effect on what we’ve mentioned above. When there is a slowdown in the economy the Fed will cut rates which propels cheaper borrowing costs in order to stimulate financial activity in businesses and consumers.

Rate cuts cause growth potential, and lower borrowing costs allow consumers and businesses to take out more loans to stimulate the economy which turns into greater profits and a stronger economy.

Which was the case in 2020-2021 when the Feds funds rate was cut down to 0-0.25%. There was a lot of consumer spending during this time, mortgages were taken out, leading to inflated housing prices. Another spending was pushed into the stock market which caused inflated asset prices. If you can borrow money for 2% and get a return of at least 10-15% during the year, you’re net positive.

Not only does money getting pushed into the stock market push prices higher, but also the cheaper cost of borrowing for businesses increased the ability to expand the business, whether through financial operations, acquisitions, or other expansions. This caused increased forward guidance and potentially caused prices to increase.

The Affect of Interest Rates on the Stock Market

The main topic throughout this reading, how do interest rates affect the stock market. As you might have already put two and two together based on the explanations that lead to this section, the stock market is affected by borrowing costs. This will drive the potential profitability of companies from a business perspective as well as from a consumer perspective.

A rising rate environment is associated with increased borrowing costs, which is usually associated with a company experiencing slowdowns in growth through higher expenses, less revenue, and lower future expectations (expected drop-offs in cash flow). Which will cause the price of the company’s stock to fall. This is the case when the Federal Reserve decides to hike rates. This is currently happening in 2022 and 2023 where the Fed is aggressively raising rates, the stock market is getting whipped out.

When companies experiences drop in earnings expectations or growth the stock price drops which then affects the overall stock market. The market is composed of multiple sectors and stocks. A collective decline in the majority of stocks will cause the market to drop.

The S&P500 is composed of 500 stocks, they are split into different weights, tech being the heaviest. A drop in technology which is a sector that is drastically affected by inflation and increased rate environments will cause a drop in the overall market. Owning stocks that have low growth expectations becomes less desirable causing larger sell-offs in those stocks.

This is what has happened in 2022 as the S&P500 is down about 25% from all-time highs while the Nasdaq (technology-heavy market) is down about 36% from all-time highs as of October 2022.
Below is a charge of the SPX, you can see from the left to the right about 2.5 years of data. The COVID-19 drop which came quickly and bounced just as quickly rallying for about 2 years, over 100%. The most recent downside was caused by an extended balance sheet, increased inflation, and now a higher rate environment. Steady decline. 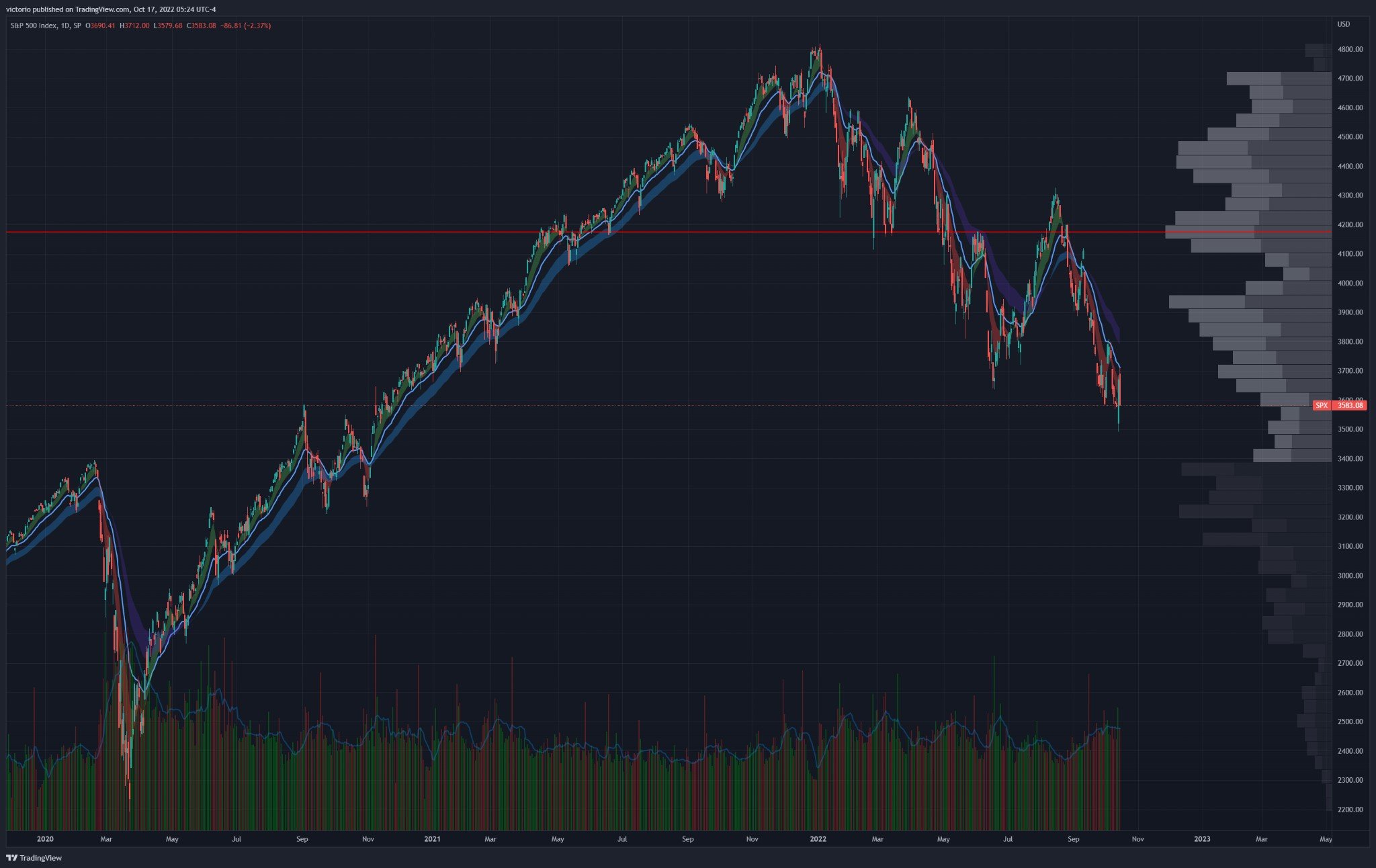 There are some sectors and stocks that can go up with increasing rates. The sectors that are consistently needed are the ones that get more influx, like consumer goods, industrial goods that are necessities, and other life-essential sectors.

Companies that have high cash reserves and are not reliant on low borrowing costs to grow their business will also hold well in higher-rate environments. Because they will be able to expand regardless of the borrowing costs.

The Affect of Interest Rates on the Bond Market

A rise in rates by the Federal Reserve causes the newly offered government securities to be more attractive. The government bond is usually the safest investment vehicle, these higher coupon bonds become more attractive. If the risk-free rate increases (the government bonds), the required rate for stocks also increases. This causes investors to think that stocks have become too risky for the potential returns that they offer, causing outflows in stocks and inflows elsewhere.

This will cause a slowdown in company growth. Along with the market demand for lower-coupon bonds falling, they will be forced to issue higher-coupon debt if they want to expand through debt. Which pushes stock prices lower.

As rates fall, it becomes easier to issue debt and borrow money.

The impact of rate changes will affect the markets in different ways, and it’s not as direct as you might think. You will have to think of the rates in affects of the companies, government and financial institutions.