Brexit uncertainty leads the beginning of the weak and some weakness to start off the more docile trading week. It was a big week in earnings as well. However, the US-China trade news took center stage again pushing indices near all-time highs.

In terms of Brexit news, last weekend the UK parliament took the side against the Brexit approval delaying the deal. Boris Johnson, the PM rejected the accelerated timetable, forcing the government to call for a general election. This caused the GBP to drop throughout the week as we saw an increased probability of a “no deal” Brexit by the end of October.

Earnings came out this week, approximately 35% of the companies on the S&P 500 reported with cautious future outlooks although many companies did well. Many of those same participants were rewarded on Friday when the White House reported continued headway during a scheduled call between the trade principles Lighthizer, Mnuchin and Vice Premier Liu.

Amazon earnings may have been the shock, the drop in earnings was the first slip up Amazon has had in over two-years as one-day shipping costs were greater than expected. In other tech news, Intel beat and raised guidance. Boeing under fire again the earnings were worse than expected, and they were expected to be ugly. In sports news, Under Armour and Nike announced CEO transitions. We anticipate further company reports in the coming weeks.

Trade talks propel the upside in the markets.

We had a very quiet week in equities until Friday came around. The low volume to begin the days in the Futures market and equity market held off the volatility. We saw ranges all throughout and the 3000 support level hold on S&P 500 futures. To the upside, the resistance was at 3015. A 15 point range throughout the whole week is not anything to marvel at and certainly is sleepy. The fact that so many earnings reports came out this week on the S&P 500 and yet the market barely reacted. Even with big names like Amazon shaking things up.

The real catalyst and what gave us a glimpse of why we had such low volatility came out on Friday, the trade talks. The apparent trade deal that is set to take the stage early November. Phase 1 up to bat and the headlines that deal is about to be signed by both nations and is near completion. The deal is being talked about between US Trade Rep Lighthizer & Treasury Secretary Mnuchin and Vice Premier Liu He.

It is suggested that we are closer to that trade deal, Phase 1 signed in November will help the equity market rally, as it did on Friday through the 3015 breakout resistance into the 3026 levels over 10 points of a breakout. The fact that we are getting close to all-time highs, an actual trade deal or a portion and the potential rate cuts suggests that markets are going to continue their rally to the upside.

A heavy week ahead in terms of economic news. There is a plethora as we anticipate the huge Fed announcement for what we thought was going to be the end of the cuts. However, we do have a massive chance of a rate cut coming up this week. Just after that, we have an NFP report on Friday. That will expose if the Fed cut was well planned.

Tuesday, news out of Australia all day, RBA Lowe speaks, and CPI data. There is CB Consumer Confidence in the morning out of the US as well.

Wednesday, ADP non-farm numbers out of the US, Advanced GFP and the famed FOMC statement and rate decision. Out of Canada, the BOC has its rate decision as well, watch the Cad dollar. New Zealand news comes out at the end of the day, ANZ business confidence. Australia has building approvals. Then data out of Asia finishes the day off. Manufacturing PMI out of China and BOJ reports out of Japan. The BOJ press conference and monetary policy.

Thursday, other than Halloween, we have news out of Canada, GDP numbers. US personal spending and Caixin Manufacturing PMI our of China.

Friday, Average hourly earnings, non-farm and unemployment data out of the US and ISM manufacturing PMI to end it all, a big Friday. 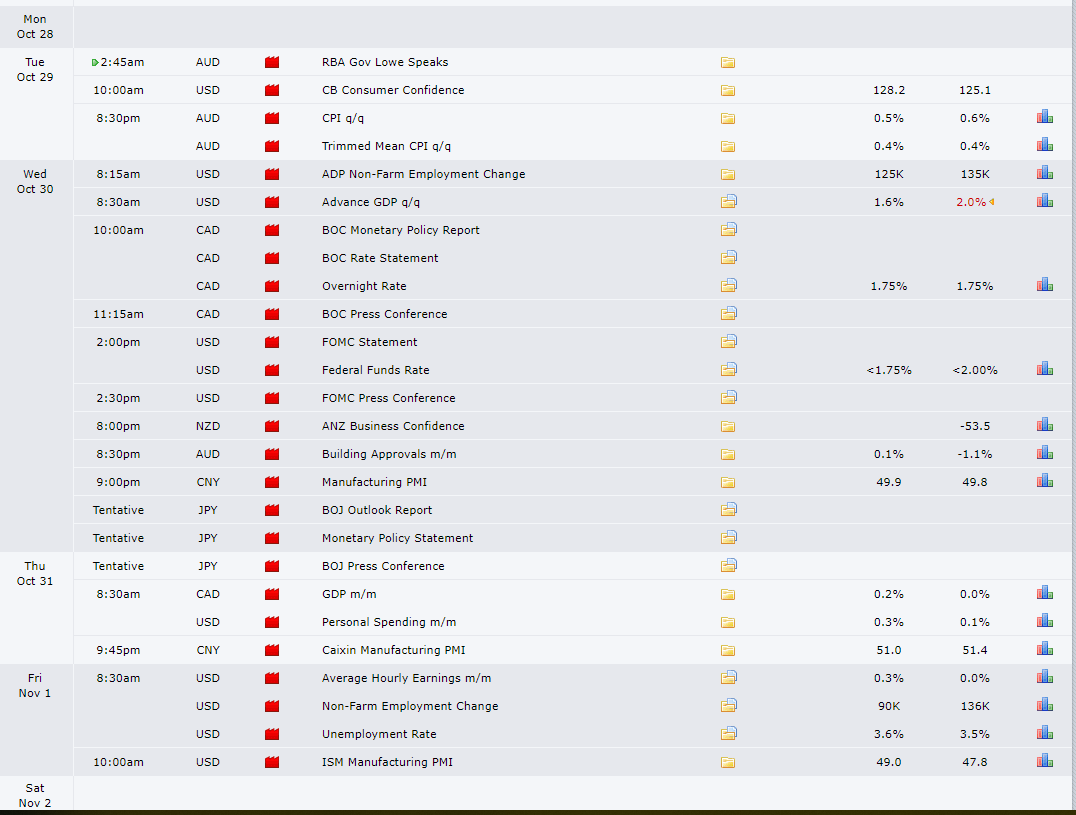