The week ahead of the Fed cut is over and equities continue to print highs. Earnings continued to flood out this past week and many companies managed to slay earnings adding to the bull side of the equity market. Such as Google, beating on both fronts and rocketing back to $1250, $50 shy of $1300. There is still uncertainty that executives have expressed, mainly around trade and growth.

US economic data continued to come out strong this week, GDP expectations beating, however, housing remained subdued. How will this play out during the next week proposed rate cut? What’s the point of cutting if the economy is strong?  While global figures were questionable on the release, weak PMI in Europe as Draghi threatens negative interest rates. That dichotomy allowed the dollar to move higher and UST yields to diverge further from other government bond rates.

The Fed cut is still priced in the same as it was before, the probability remained the same even with the new economic data that his the news. T Thursday’s ECB meeting clearly opened the door to rate cuts and other potential unconventional measures in September. Draghi’s shift further into dovish territory, along with a soft US PCE reading and revision on Friday all but confirmed the Fed will offer up an ‘insurance’ rate cut next week. The US yield curve flattened while gold and crude oil prices consolidated. The S&P500 hit record highs this week, gaining 1.7%, while the DJIA edged up 0.1% and the Nasdaq rose 2.3%.

We all know that markets have been pressing into all-time highs but the Fed continues to add stimulus, this is a dangerous game to play. It’s happened before though, the Fed has added stimulus time and time again in an expansionary cycle to fight the risk of recession.

However this is the first time ever that it has occurred four times in a single cycle, that’s right four times! In 2010/11, 12/13, 16/17 and now 2019. This has come at a time where it is pretty safe to consider that equity markets or risk assets are overpriced in a very low-interest-rate environment (artificially low).

There are a few catalysts to this artificial upside, one of course being low rates. Another is the trade war, no deal yet but Trump keeps bolstering the staggering improvements and steps towards a deal. Stock buybacks have propelled risk assets higher as well and enterprises that enjoy these capital raising conditions.

With this in mind, this stimulus added could very well be dangerous and ultimately fail because of the burn out of asset inflation at the end of said stimulus. You can’t stimulate forever without economic repercussions. Eventually, investment growth will stall, and business earnings will show signs of slowing.

There is some pessimism that is surfacing in the global investment world, credit downgrades, and there may be enough movement to break below the speculated “Powell Put” Which was previously around 2350 into the December fall. Now much higher.

It’s not all doom and gloom, there is a scenario where Powell’s stimulus propels the growth cycle, another growth cycle into the Election. Another upswing in the equity market would drive new momentum in mal-investments which will be something to watch carefully.

We may sound like a broken record, but that’s how it is. OPEC and non-OPEC have been on a mission for three years now, to reduce supply and increase the price of oil. The cartel is really working hard, artificial oil prices may be back.

In the past OPEC + meeting, members have decided to slow production into March of 2020, cutting supply by 1.8million barrels per day total. This is due to the increased supply that was tampering with their oil prices.

OPEC is taking any measure it can to find the oversupply of oil in the market to cut supply. They are currently taking the most recent 5-year average of oil stocks, which they report. Now they want to go back to 2010-2014 instead of 2014-2018. This is a little outrageous considering the 2010-2014 data will not give an accurate representation of the current oil market. No matter how OPEC decides to measure it, they’ll come to the same decision, cut to increase the price.

The use of 2010-2014 data does not include the large supply that came at the end of 2015 through 2016. The data they want to measure is not as accurate because demand is so much lower than it is now. If they give too much attention to this metric, they could be in trouble. The last point is that the measures come from developed countries, excluding massive nations like China and India. Whos stockpiles are honestly not measurable.

Either way, the supply glut in oil is on the rise, it’s pretty simple why.  OPEC + are greedy, they don’t want to limit their supply because that is money left on the table. Other nations will simply produce more and take advantage of those who don’t.

Data shows that OECD commercial oil stocks in May rose over 25 million barrels than the 2014-2018 average. So if the 2010-14 data is used, the estimated oversupply may be a lot higher due to skewed metrics which makes OPEC’s case that much better to the naked eye. To manage production into 2020 when the deal expires. Non-OPEC is growing at an alarming rate and the 2020 oversupply may be the biggest yet while demand growth falls off. They may get lower oil prices. Surprise! 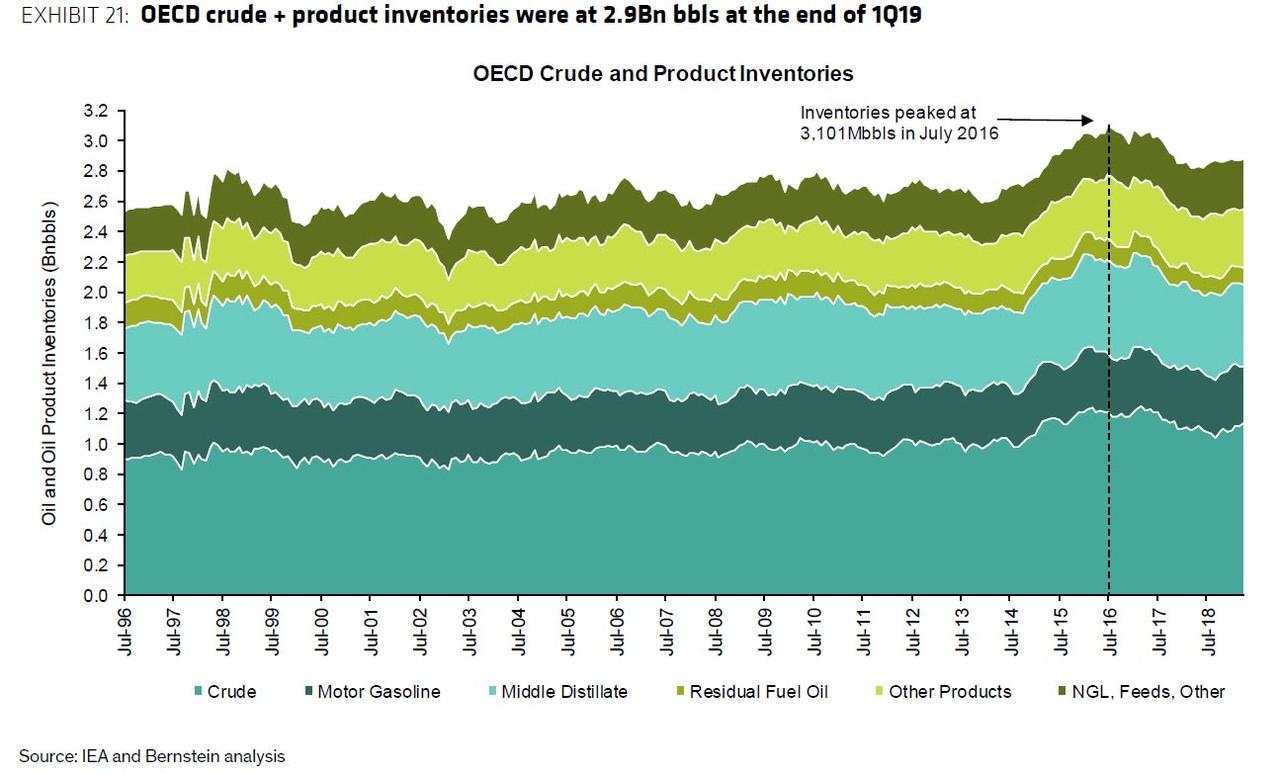 Options Trade of the Week

Last week we had a short trade planned out in the equity markets. This was the best trade of the week, short on Five Below (FIVE).

Lower lows and lower highs are forming on the stock, bearish market structure leads us to this short idea. More volume on the swings lower as momentum dies out on the upside. We need to see a move lower in this stock at our proposed level before the FOMC announcement which can move most equities higher. The sell area comes into confluence with the Volume profile resistance as well and the 100 day moving average is holding resistance there. If we see a move into 128 on weak volume and intraday rotations we can start to come up with a short idea. There is still the possibility of a move lower if we break the 121.50 moving average support.

For more TRADEPRO options ideas check us out at: TRADEPRO Academy.

Huge economic news week ahead of us! Packed with high impact events and opportunity for the futures trading world. Along with Forex possibilities. There are a lot of US events which will move the equity futures markets.

Tuesday, BOJ continues with a press conference. Consumer confidence comes out from the US and then in the evening data out of China which will be interesting. manufacturing PMI. This will affect global economic outlook and equities. New Zealand has business confidence and Australia is set to release CPI data.

Wednesday, this is the day all traders have been looking forward to for some time. The day kicks off with ADP non farm numbers out of the US, Canadian GDP then comes out pre market. Finally the event of the month, the FOMC statement and Fed funds rate. Set for an expected rate cut! Opportunity throughout and the FOMC press conference which will give us a hint as to what the Fed and Powell have in store for the future.

Thursday, BOE inflation report, Official Bank rate votes, monetary policy summary and official bank rate all pre market out of the UK. This is very important for the UK economy and potential Brexit deals. The day ends of ISM manufacturing PMI out of the US and retail sales out of Australia.

Friday, pre market another amazingly opportunistic report from the US, Non-farm and employment numbers.