First rate cut in over a decade and more tariffs, US equities PLUNGE.

Headlines from both macro and corporate levels rocked markets and investors this past week as US equities slumped from their all time highs. Increased global and economic uncertainties brought fear selling in the S&P 500, Nasdaq and Dow Jones this past week. We experienced the first Fed Funds Rate cut in over 10 years, a normally bullish event, bring down the markets drastically.

The drop came from an unaccommodating Fed Chair, Jerome Powell, who said that this was not the beginning of a rate cutting cycle. Fed Chair managed to drop the market on a rate cut with the expectation of another one in September. Trump was disappointed with the Fed Chairs choice of words which could be detrimental for his job.  This was the first cut in 11 years, cutting the funds rate by 25 basis points as expected, which was deemed a “mid-cycle policy adjustment”. With a now priced in third rate cut by the end of 2019. More info below.

Earnings have been the main focus of markets leading into this week as the Fed and trade tensions took over. Central banks all over were making headlines this week, including the BOJ and BOE. Global economic data continued to worry investors and cracks in US manufacturing numbers came alongside benign inflation readings.

Trump hit the markets with quite the announcement on Thursday as he declared a 10% tariff on remaining $300Bn in Chinese goods, set to be put in effect September 1st. Trump was not satisfied with the trade talks in Shanghai last week, or Fed Chair Powell for that matter. This caused the greenback to drop. All markets dropped on trade talk news including oil and global interest rates made a fresh leg lower. Leaving the 10-year yield at a level that has not been seen since Trump’s election. German Bund yields also tested the -50 basis point level for the first time.

The much anticipated event of the week was released pre-market on Friday, the US jobs numbers. July payrolls came out in line with expectations, while June was revised lower. Wages moved higher and unemployment trickled higher.

The GBP dropped to a 2-year low as new UK PM Boris Johnson remained stern on a Brexit deal being reached with the EU. Investors also kept a wary eye on Hong Kong as reports surfaced that the Chinese army was building up troop levels on the border in preparation for a potential severe crackdown on demonstrators.

Tariff Man and the Fed

Trump is playing an interesting game with both China and the Fed. As he’s trying to play both of their hands. The Fed cut rates by 25 basis points as expected this Wednesday. On the last day of the month. In which Fed chair Powell said that the Fed’s monetary policy focused on supporting their 2% inflation target, insuring against the downside risk and supporting demand. He made it clear that this is not the beginning of a rate cut cycle, however he also mentioned that this is not a one and done rate cut. We expect another rate cut in September.

Trump immediately reacted, saying that Powell disappointed again. Trump’s motives were quickly revealed as he wanted a lower dollar to get the upper hand in the trade war. He wants more cuts and is not worried about a temporary slump in markets as he wants further rate cuts. Which not only would increase equities but decrease the dollar to devalue his countries currency for increased trade. Also to get the upper hand on China in the trade war.

Trump wants faster rate cuts and yesterdays Fed performance really shook up his stance with China in the trade war, destabilizing his hand.

Today’s opened looked like the perfect buy the equity dip for investor all over, which was pretty good into the morning session. US S&P 500 futures rallied above 3000 on good volume which had us thinking that the whole drop was just erased in 2 hours.

Trump was quick on that, he took his chance to take reigns of the trade war yet again. In comes tariff man with an additional 10% on the remaining $300Bn of goods/products from China into the US. A tariff he said he would not activate. Down go equities and the greenback.

Trump tweeted his dissatisfaction with the trade negotiations with China, he’s been very vocal on the matter on socials. A trade deal was supposed to be secured three months ago but China wanted to re-negotiate. He mentioned that just last week China agreed to buy agricultural goods from the US in large quantities. However, they failed to do so. Trump also addressed his concern with the sale of Fentanyl, a deadly substance, to the US which has not ended.

With this said, starting September 1st, an additional 10% of tariffs on the remaining $300Bn of Chinese goods will be set in motion. Not inclusive of the $250Bn already tariffed at 25%.

Trump is hopeful for a deal, however, all of this uncertainty and rate cut mix is not in the best interest of the economy. Jobs numbers came out as

Options Trade of the Week

Would you believe us if we told you that this trade continued lower? This may be one of our options trades of the year. The Fed Cut that was deciphered as a suspicious move by the Fed in this expansionary cycle helped equities slump. The fact that Powell said this was not the first of a cycle of cuts scared the markets. Then Trump came out with an additional 10% of tariffs on Chinese goods on Thursday, August 1st to really drill the knife into the recovering markets. This helped the downside in FIVE open up.

Lower lows and lower highs are forming on the stock, bearish market structure leads us to this short idea. More volume on the swings lower as momentum dies out on the upside. We need to see a move lower in this stock at our proposed level before the FOMC announcement which can move most equities higher. The sell area comes into confluence with the Volume profile resistance as well and the 100-day moving average is holding resistance there. If we see a move into 128 on weak volume and intraday rotations we can start to come up with a short idea. There is still the possibility of a move lower if we break the 121.50 moving average support.

The economic news quiets down in the coming week in comparison to what we just experienced in markets. Traders wanted more volatility and that is exactly what they got. Massive shifts in market price mid-week to end the week in equities. This coming week is not US heavy in terms of high impact events but there are a lot of events out of Australia and New Zealand that can offer traders a lot of FX opportunity.

Monday, ISM data out of the US and employment numbers out of New Zealand.

Friday, GDP, manufacturing production and prelim GDP all out of the UK. Watch the already volatile pound on this news. Canada has employment numbers pre market. 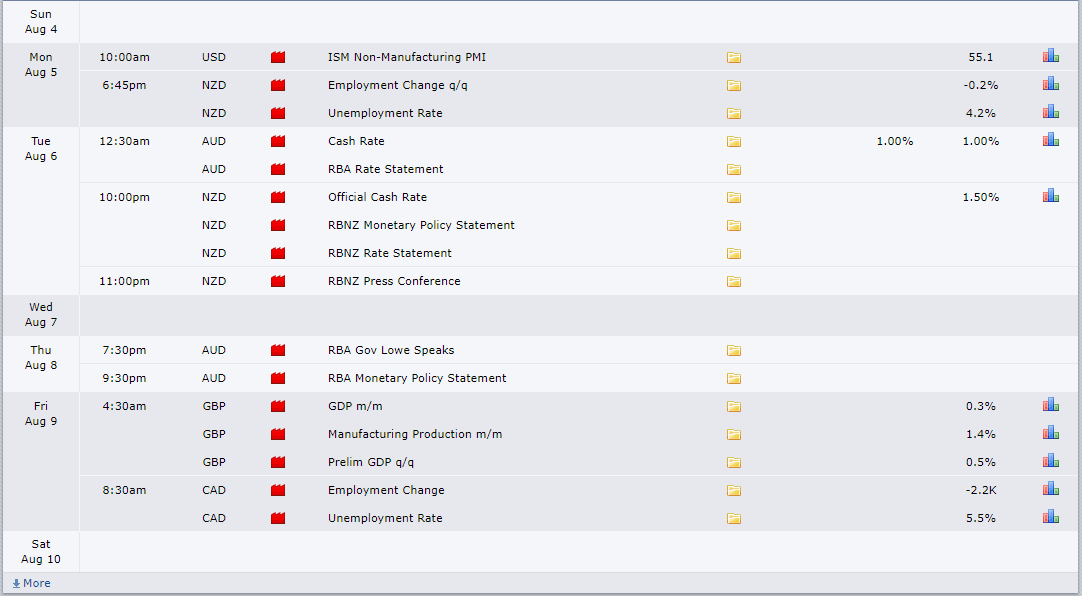