What is the Head and Shoulders Pattern?

Often considered the king of reversal patterns, the head and shoulders chart pattern is very popular amongst beginners and novice traders because it is relatively easy to spot and provides well-defined areas for stop loss and profit-taking levels.

The Head and Shoulders pattern appears on all timeframes (since markets are fractal) and is considered to be one of the most reliable signals for indicating a shift in the market trend.

The traditional head and shoulders pattern forms when a bullish trend has exhausted itself and signals a bullish-to-bearish reversal in the trend.

The inverse head and shoulders pattern forms when a bearish trend has capitulated and signals a bearish-to-bullish reversal in the trend.

How To Identify The Head and Shoulders Pattern (Bearish Reversal)? 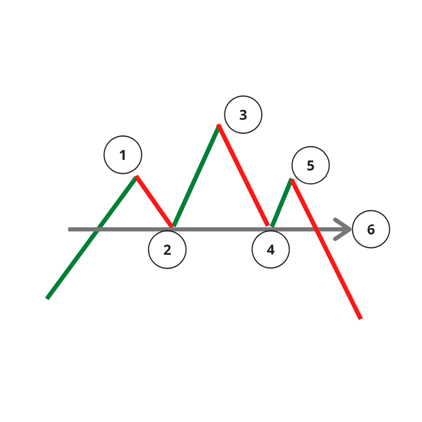 The head and shoulders pattern is defined by two swing highs (the shoulders) with a higher high (the head) between them.

Let’s break down how this pattern forms into a 6-step process:

The head and shoulders pattern is confirmed when price breaks through the neckline support created by the two swing lows.

How To Identify The Inverted Head and Shoulders Pattern (Bullish Reversal)? 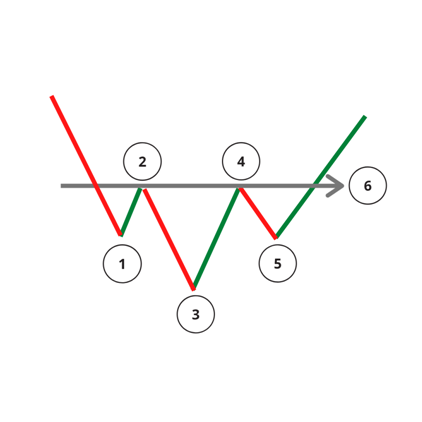 The inverted head and shoulders pattern is defined by two swing lows (the shoulders) with a lower low (the head) between them.

Let’s break down how this pattern forms into a 5-step process:

The inverse head and shoulders pattern is confirmed when price breaks through the neckline resistance created by the two swing highs.

A couple of things to note when it comes to the formation of the head and shoulders patterns:

Understanding the Head and Shoulders Pattern – Why It Works?

Any price action patterns that we see on charts are simply a visual representation of the tug of war between buyers and sellers.

As with any pattern – nothing is perfect and works 100% of the time, however, there are some reasons why this pattern is considered one of the most reliable in the school of technical analysis!

In the context of a bullish trend, when the buyers create a new swing high above the left shoulder, they are confident to enter the market because they have seen it trade higher.

However, when the market fails to get back above the head, forming the right shoulder, it represents a failure from the bulls to push prices higher as sellers have entered the market.

This is the point at which traders that are long become “fearful” for their trades turning into a loser.

As the market declines and approaches the neckline support again, any buyers that are still long will see the neckline as a “last chance” support level – below it, they will be experiencing the pain of loss and will be forced to puke out of their positions – indicating capitulation.

How to Trade the Head and Shoulders Pattern

Now that you know what the pattern is, how to identify it in real-time, and why it works, let’s take a moment to discuss how you can trade it!

The process is relatively simple and contains the following steps:

Some added tips to help you with this:

Sometimes the risk: reward is poor if the breakout candle is large so you can wait for a retest of the neckline in order to reduce the stop size (comes with the possibility of missing the move altogether)

In this example, the USDJPY pair was on a massive bull run that lasted into 2015. After trading as high as $122.00, the pair pulled back to $116.00 and created our left shoulder. The head of this pattern was formed around the $126.00 price level after trading above the left shoulder ($122.00) to form a higher high. Shortly after trading this new high, the market then declined back down to the $116.00 price level where buying demand came in to force another rally The bulls failed to sustain any momentum above $124.00 and the market declined back towards the neckline at the $116.00 level. Once the market broke out below the neckline support, the pattern was confirmed and went on to complete the measured move (distance from the head to neckline projected lower).

In this example, the Sugar market was on a massive bearish run that lasted into April 2020. After trading as low as $0.10150, this commodity pulled back to $0.10800 and created our left shoulder. The head of this pattern was formed around the $0.90000 price level after trading below the left shoulder ($0.10150) to form a lower low. Shortly after trading this new low, the market then rallied back up into the $0.10800 price level where selling pressure came back in to force another sell-off. The bears failed to sustain any momentum below the $0.09900 price level and the market rallied back towards the neckline at the $0.10800 level. Once the market broke out above the neckline resistance, the inverse head and shoulder pattern was confirmed and went on to complete the measured move (distance from the head to neckline projected higher).

Now that you are familiar with the head and shoulders pattern, it is time to put theory to practice!
The system is not perfect, none are, but it provides you with a very logical method to trade the markets based on the stops of other traders getting triggered.

We challenge you to pull up your favorite markets to trade and to practice identifying this pattern so that you get some screen-time under your belt!