If you’ve been trading in the markets for any amount of time, you will have likely experienced the situation of putting on a trade, only to have your stop loss triggered and then almost on a dime, the market reverses and blasts off in the direction of your profit target without you on board. In this article, we try to show you how to use order flow to identify trapped traders and how to get yourself positioned in order to profit as they puke their stops!

Frustrating right? I know this feeling first hand…but what if you could be on the other side of that trade?

What if you could actually profit from traders that are stuck in a losing position?

Traditional technical analysis can only get you so far!

Using order flow tools such as the footprint chart to complement your existing arsenal can provide for a potent combination.

We won’t cover order flow in detail in this post, but you can check out these articles From HERE and HERE to get an introduction to order flow and the footprint chart.

But what we will cover is how to use order flow in the form of the footprint chart to find and profit from these trapped traders!

What is a Trapped Trader?

So what is a trapped trader? These are the traders buying highs and selling lows because they missed the original move at the location where it was still “too risky” for them to try the trade. So now instead of waiting for the next best trade like a TRADEPRO, they are trying to chase the market – a classic case of FOMO!

These traders make up the losing 90 percent since they often enter into the market at the worst locations where trade is overcrowded and the market is going against them.

Liquidity for those new to the term simply means resting stop orders – this is where the market is likely to probe next since it moves to and through liquidity.

Institutional traders use this liquidity to fill their orders and create order flow in the opposite direction of the retail trapped traders – this is how those explosive market moves are generated.

Now that you know what a trapped trader is, the next question becomes how do we identify them in real-time with a high degree of probability?

This is where an understanding of market structure and order flow comes into play! 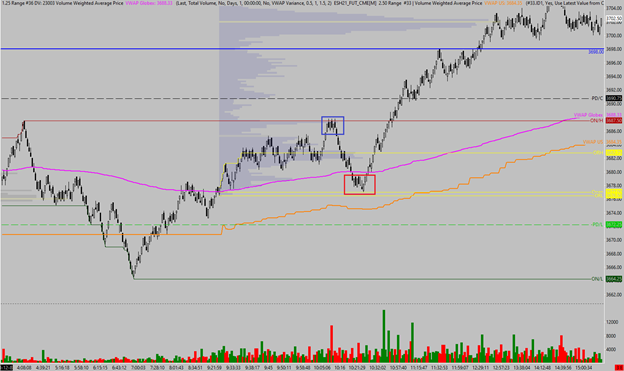 In the above example, I want you to focus on the price action in the red box and ask yourself if you would have taken a buy trade in that area based on what you see on the left side of the chart.

Most people are likely to answer no!

Now, why would that be the case? Because traders would argue that the market was making clean higher highs and higher lows before that deep pullback occurred from the zone indicated in blue.

The fact that previous higher lows were broken to the downside indicated a potential bearish shift in the market structure at the time and once the market broke below the pink VWAP (Volume Weighted Average Price) you can bet that a bunch of breakout traders was jumping into the market in anticipation of another leg lower.

Take a moment at this time to remember what we mentioned about trapped traders earlier – they trade based on emotions and tend to buy highs and sell lows as a result.

Now imagine this situation for a quick moment – Let’s say you were planning on fading (selling) this market at the overnight highs in the blue zone ($3687.50) but you hesitated to pull the trigger and few short minutes later, the market was down 7.5 points and trading around $3680.

You could have made $375 per contract if you took the trade when it was still “risky” but instead you’re sat on the sidelines empty-handed and frustrated. You watch the market continue to drop and finally convince yourself that the market is going to continue lower and you enter a short position.

After several failed attempts to break to new lows, you start to get nervous about this trade. It looked like a sure bet at the time, but now that you are in the trade it’s starting to turn into hope.

You decide to reduce your risk and pull your stop loss closer to your entry price.

Guess what – you’re not alone! If you are starting to get nervous then it likely means that everyone else who joined the short party late in the red zone below the VWAP is doing the same and adding to the liquidity (buy stops) that are sitting above the current market price.

Now when we look at the same red zone through the lens of the footprint chart, we can see the story developing a bit more clearly from the perspective of order flow.

As the market sold off from the highs at $3687.50, aggressive selling followed suit in the form of the red sell imbalances showing up as the market kept dropping.

Once the pink VWAP was broken to the downside it created a “footprint” of aggressive selling where sellers had to defend in order to continue pushing the market lower. The next rotation higher (1) was met with sellers as you can see the 79 sell imbalance.

In the next rotation (#2) the sellers failed to push the market any lower and a buy imbalance of 133 shows up at the low. This is showing a slow down of bearish momentum and the first sign of a potential buy stop squeeze in the making.

On the next rotation (#3), sellers step back in an attempt to push this market to new lows. Instead of that happening on the next rotation (#4), the bulls step in again this time printing a triple stack of buy imbalances showing buying demand is starting to enter the market.

At this point in time, if you entered a short below the VWAP level ($3680), you’ve seen two failed attempts at a new low, and buying momentum starts to enter the market. If your stop was above the ORH ($3682.75), you might consider moving it lower just above $3680 in order to reduce the risk on this short trade.

After rotation (#5), some more sellers step in and force another attempt at new lows below $3678.00 and the result is a measly one tick breakdown and bullish reversal with another buy imbalance (#6).

Again, imagine being short below $3680.00 in this situation and seeing the market fail to make a convincing new low after three attempts. Add to that the sign of buyers entering the market absorbing the selling and you get a recipe for a short squeeze.

This is where a majority of the traders that were short below $3680 started to buy back their positions in an effort to exit the trade at a loss. That’s why you see such aggressive buying!

The play here is to set some buy limits between that stack of buy imbalances in order to jump in on a small rotation before the buy stop run continues.

In this example, the opportunity was a buy entry between $3680.75-3683.00 after short traders got trapped and running the trade-up into the overnight high at $3687.50, which translates to a profit of around 7 points or $350 per contract.

As you’ve seen with today’s example, order flow tools like the footprint chart can be a great compliment to your existing trading strategy.

Just like anything with trading, nothing works 100% of the time, but combining the power of market structure analysis with order flow can really help you get a better read of the market and make better-informed trading decisions in the heat of the moment when it really matters!

Join us at TRADEPRO AcademyTM to learn how we take advantage of trapped traders exactly like this on a daily basis. There has never been a better time to make the investment in yourself!

Want to learn more? Do you want full-day trading guidance and strategies? TRADEPRO AcademyTM teaches ALL of our strategies in our course.