What is the Inverted Hammer Candlestick pattern?

One of the most important skills that a day trader can develop to maximize their profit potential is to learn how to spot reversals in the markets as they are forming in real-time. 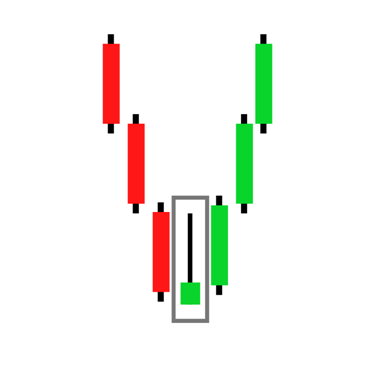 The inverted hammer candlestick pattern falls into the market reversal category and can be used as a signal to validate a potential bullish reversal in the market.

As a single candlestick pattern, the inverted hammer is relatively easy to spot and can provide a good entry opportunity into a new trend if the pattern holds – validation will be confirmed or rejected through the price action that follows the pattern.

Learn more about the inverted hammer candlestick pattern, including how to spot and trade it,  in this guide!

How to spot an Inverted Hammer Candlestick Pattern?

The inverted hammer pattern occurs in a downtrend after the price has been falling for some time and then buying pressure shows up and attempts to push the asset prices higher. 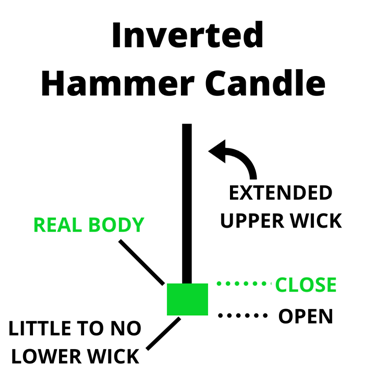 The pattern consists of a single candlestick that has a small “real” body with a long extended upper wick and little to no lower wick.

The name for this pattern comes from its shape – it looks just like an upside-down hammer!
But don’t confuse the inverted hammer with a shooting star pattern-  they both share the same visual features but have very different meanings!
To help you make the distinction between an inverted hammer and a shooting star, just remember this – inverted hammers show up at the bottom of a downtrend, whereas the shooting star will appear at the top of an uptrend!

The Psychology behind the Inverted Hammer Candlestick Pattern

The inverted hammer pattern forms when bullish traders start to gain some confidence in the face of a downtrend.

The close above the open of the inverted hammer candle suggests that the sellers were unable to close the market at new lows, meaning that momentum may be shifting over to the buyers and that a bullish trend reversal might be underway.

Think about it this way – if an asset is trending lower and you get into a short position but the market retraces and then fails to print a fresh low on that session – are you feeling good about your trade?

Probably not – in fact, you might feel “trapped” in your short position as the buying momentum has you worried the trend might reverse, leaving you with a loss on the trade.
If the next candlestick confirms the rejection of lower prices then the probabilities that short traders will “puke” their positions will increase and greatly improve the odds of a trend reversal.

How to Trade the Inverted Hammer Candlestick Pattern?

Now let’s walk through how you can expand this pattern into a usable day trading strategy.

Let’s walk through a quick example of these steps using the GBP/USD chart above:

Is there a bullish trend present? In this case, we can see that the market is making higher highs and higher lows, with the exception of recent price action, which indicates that some selling pressure is entering the market around the $1.24700 price level.

Is there a support level below the current market price where the buyers may start to return into the market? In this example, we have identified the price level around $1.24400 as a potential flip zone support that could be defended as support by the buyers.

The market has traded back into this zone and printed an inverse hammer candlestick after three consecutive candles of selling pressure showing us that the buyers are returning back into the market and the recent selling momentum might be waning – a potential trade setup is in the making.

What do we need to see next in order to qualify the trade setup? One more candlestick to print and confirm the reversal!

Do we get that? Yes – the next candlestick that prints after the inverted hammer pattern are a bullish engulfing pattern which is another bullish reversal signal and confirms the setup -we can take the trade

The final step in this process is to take the trade and manage it accordingly – a conservative entry would be to get long on the close of the second candle after the inverted hammer, with a stop loss below the support level and take profit at the previous swing high.

The inverted hammer candlestick is one of many patterns in the world of technical analysis and should not be viewed as a trade signal in isolation.

The strongest setups tend to have a number of confluence factors that line up with the trade idea – whether this is price action patterns, volume spread analysis, support, and resistance, or any other indicators you might use.