Impact of Inflation on the Stock Market

The impact of inflation is a hot topic. Can you imagine what your life would be like if you suddenly got a raise to $1M a year? That would be amazing you think to yourself.

But what if at the same time the price of groceries also increased to $1M a month?

All of a sudden you are a broke and hungry millionaire.

While this example is extreme, it is important to know what inflation means and how inflation impacts the stock market.

The reality is that we are in a massive inflationary cycle at this time and many market participants are extremely worried – and for good reason.

But I will show you how you can come out on top and make this into an opportunity.

Let’s start by understanding what inflation is first.

Let’s start by understanding what inflation is first.

Inflation is defined as the decline of purchasing power of a given currency over time.

If you are making the same salary but the cost of goods and services are increasing, you are able to purchase less of them. Ultimately, inflation is an indirect pay cut.

Because the value of money decreases over time during inflation, it hurts savers and rewards debtors.

If money is worth less tomorrow, so is your debt. Therefore, people are incentivized to borrow heavily at cheap interest rates today and invest in the stock market for future gains. This inflow of money pushes stocks higher, which in turn creates wealth for investors. This wealth creates “more money”, which chases the same amount of goods and pushes prices higher. But because prices are higher, money is worth less. Now those same investors have to borrow even more money to generate even more return.

That is why inflation is so dangerous when it gets out of control – because it creates a repeating cycle of ever increasing inflation. There is a saying about cockroaches, where you see one there are more. The same is true of inflation.

One of the biggest problems of inflation is that it hurts savers. You are not rewarded by hoarding cash, because it loses value rapidly.

In high inflation environments, people get richer in dollars but often forget that at the same time their purchasing power is being proportionally eroded.

So what happens when inflation increases too quickly? What is the impact of inflation?

Hyperinflation is defined as rapid, excessive and out-of-control general price increases in the economy.

The definition economists like to use of hyperinflation is a 50% increase per month. Imagine that? Every month you can buy half of what you could the prior month?

There are some extreme examples of this in history – primarily Hungary which holds the record for the highest inflation rate of 41.9 quadrillion percent in July of 1946. You read that right… quadrillion!

Every time hyperinflation has hit an economy, it has ended with the collapse and decimation of the currency.

Said differently, hyperinflation leads to a very quick and sudden annihilation of wealth for an entire country. You lose everything overnight, including the ability to feed yourself and your family.

Now you understand why inflation in the stock market gets investors and traders very fearful. This is also why the Federal Reserve is so involved in controlling the interest rate and inflation through their monetary policy tools. Furthermore, this is why the stock market is whipped around so quickly by a change in Fed policy – and investors anchor to every single word.

There are also periods of disinflation and deflation – but that’s another topic for another time.

The good news is that we are far from hyperinflation for the time being. However, worries are mounting and many wealthy investors, traders and institutions are sounding the alarm bells.

How Inflation is Measured

Before we take a deep dive into some historical high inflation periods in history and the stock market, I want to take a minute to explain how inflation is measured.

The most common measure is called the Consumer Price Index, or just CPI for short.

This index is widely used, but is very controversial on whether it accurately captures the true costs for everyday people. It is also used for calculations of Gross Domestic Product (GDP) in an economy, and real returns for investors.

SOURCE: US Bureau of Labor Statistics

A great website for charting CPI and other economic indicators is FRED, which can be found at this link here. Because the CPI data is widely available and goes far back, I will ignore the controversy and assume it does a decent job at recording inflation.

We will use this measure for the next section to discuss the stock market impact of past high inflation cycles.

In the US economy, the annual inflation rate in the last two decades has typically averaged around 3%. Hence, on average, every year you lose 3% of your purchasing power and savings if they are not invested.

The highest periods of recorded inflation according to the CPI occurred during, and post World War 1 and World War 2. As the economy began to grow exponentially post WW1 and WW2, so did the inflation rate. The Vietnam war had a similar effect, pushing inflation higher.

In 1945, after WW1 inflation peaked at over 18%. This time with price controls in place, deflation only went down to approximately -3.5%.

The stock market boomed with inflation increase, and then bust shortly after when prices jumped too quickly. However, since each of these are accompanied by war and severe hardship, we can focus on two of the most recent scenarios instead. These are better examples of economic driven inflation cycles.

During the late 1990’s, any company with an internet presence and dotcom address rose sharply in value. No revenue, no problem. Companies were going from zero to million dollar valuations overnight. In the late 90’s a million dollars was still BIG money.

In the monthly chart below, the candles are the S&P500 stock market index, while the line chart at the bottom is the US inflation rate in percentage. 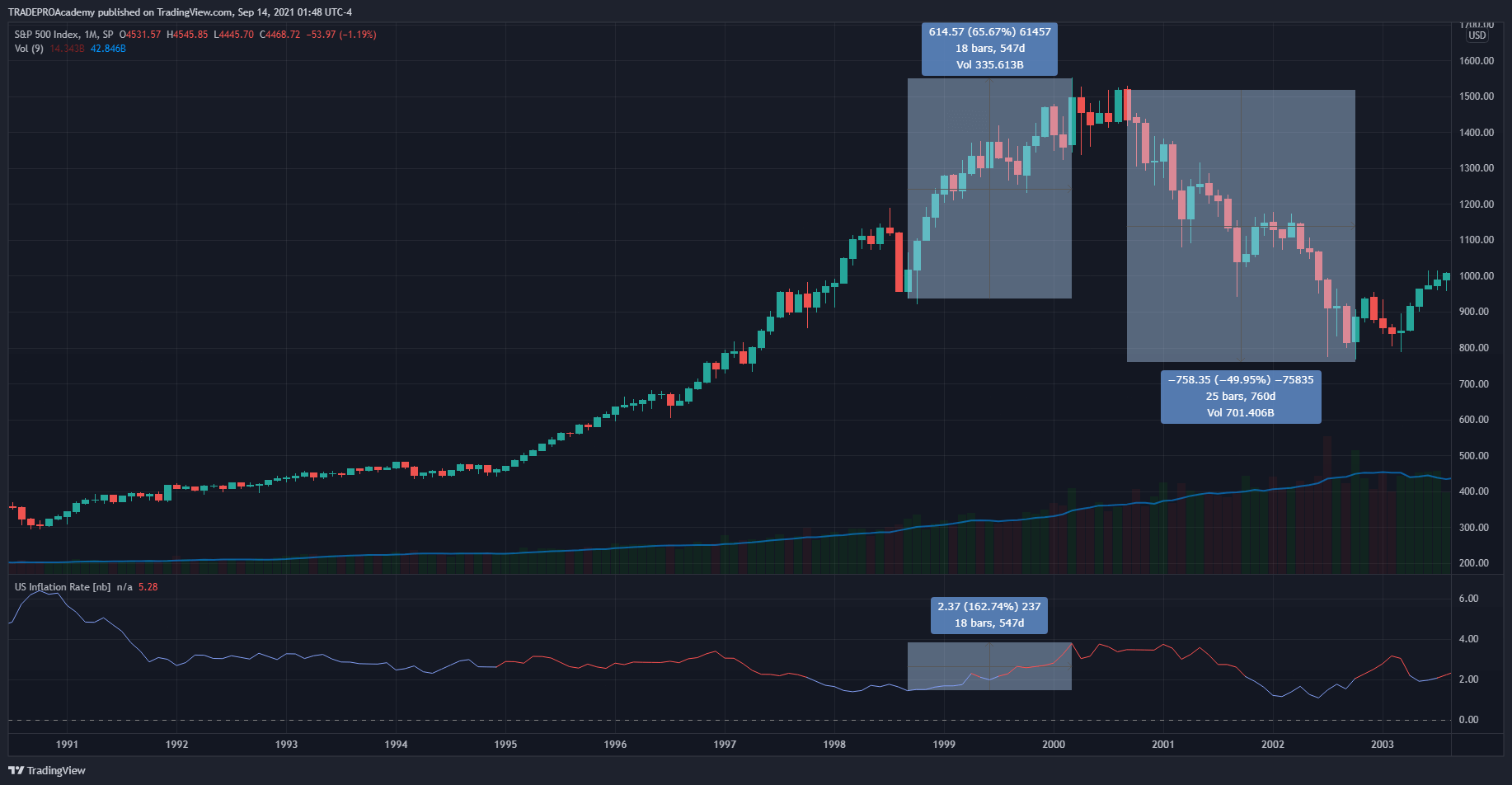 From September 1st, 1998 to March 1st, 2000 the stock market increased 65% in just 18 months. In the same time period, inflation rocketed 162% and whipped out more purchasing power than a roaring bull market could create.

In the following two years, the stock market dropped a total of 49.95% as inflation also decreased by 43.71%.

Once the stock market bottomed out, we started a new bull market run higher into the next big bubble.

Leading up to the financial crisis, banks were packaging garbage mortgages close to default and getting rating agencies to give them their highest quality endorsement. The economy saw explosive growth fueled by a boom in mortgage debt with deceptive payment terms which homeowners had no chance of ever paying it back. Wall street got greedy, and packaged products that very few knew the inner workings of, including the big banks themselves. What could go wrong? When was wall street ever wrong?

As the economy expanded, inflation also followed higher. In the 55 weeks following the bottom of the tech bubble, the stock market rallied 100%. 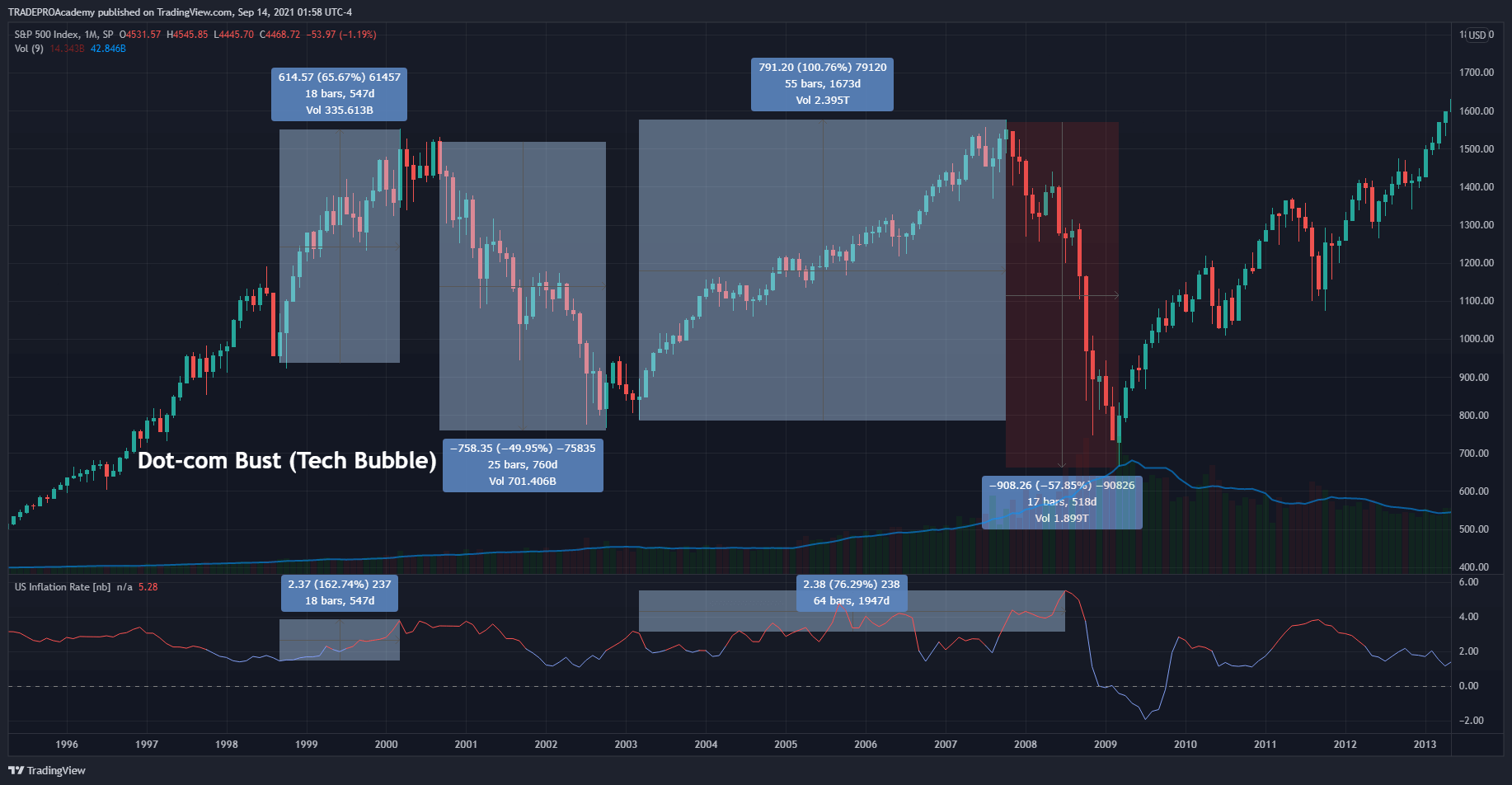 In the early stages of the housing bubble imploding, inflation continued shooting higher until it peaked in July of 2008. This inflation increase exasperated the downside, as investors lost money in the stock market hand over fist. Meanwhile, the little money they had left was devalued by inflation at the same time.

The impact of inflation in this case was huge. Eventually this inflation cycle led to a massive collapse in the stock market of 57.85% in just 17 months.

This collapse gave birth to a wall street bailout, as big banks got taxpayer money to stay afloat. Lehman brothers however was not so lucky, and went bankrupt. To this day, the Lehman Brothers collapse is iconic and symbolic of the housing bubble crisis in 2008.

In January of 2020, a global pandemic swept the world and sent the stock market 35% lower in a record 2 months time! This is a major collapse, driven by a sudden black swan event that was unforeseeable.

The reaction was to print more money at record pace and provide stimulus and monetary support to individuals, businesses and the stock market.

Since more stimulus was added, the stock market has responded accordingly and rallied over 101% from the COVID-19 lows. 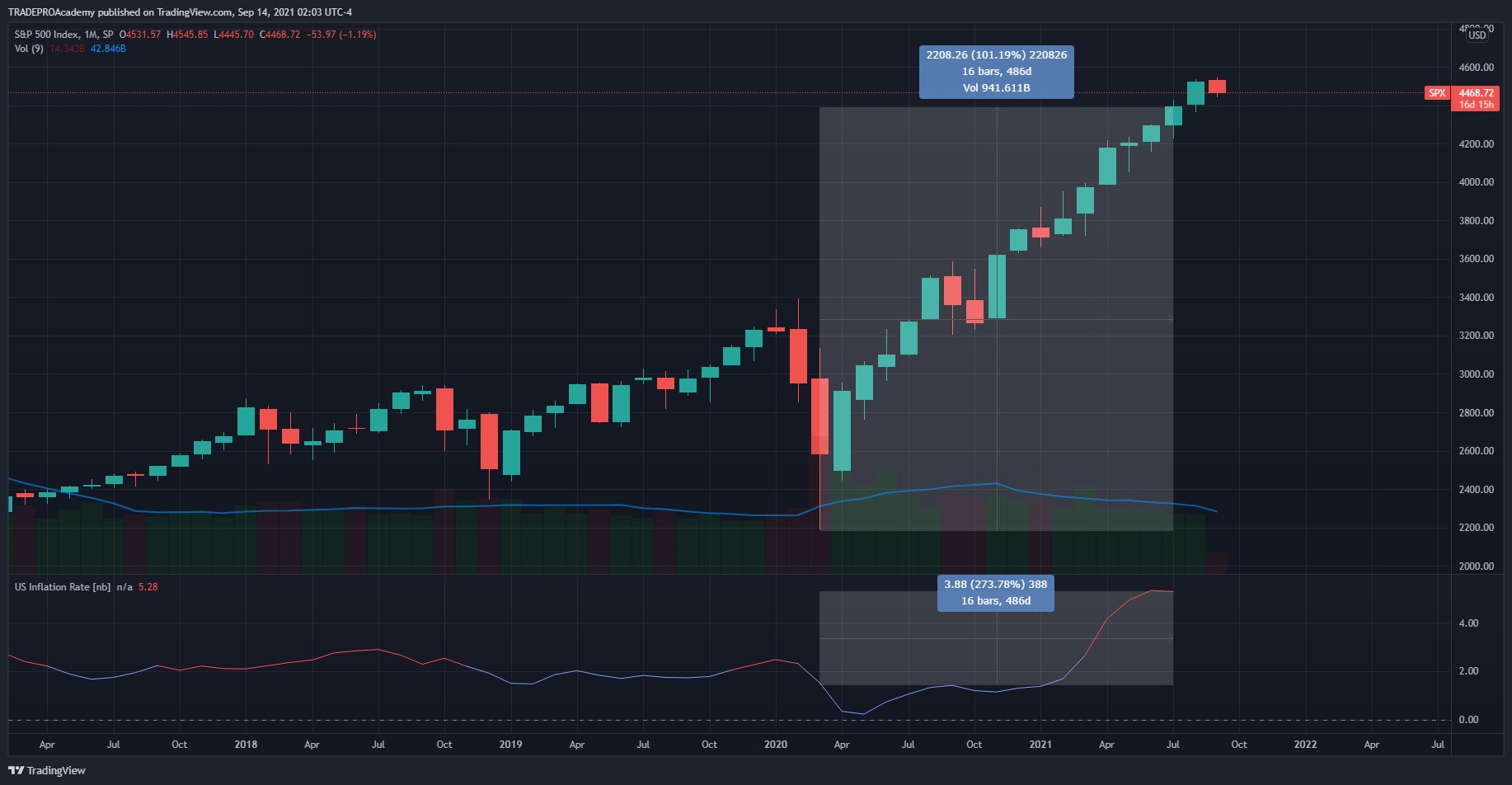 However, inflation in this same time period has grown by 273%!

When you finance an economy with money creation, and fuel the debt load further – it has the inevitable effect of increasing the price of goods and services while lowering the purchasing power by devaluing the US dollar.

The big question this year is, will inflation get out of control? Will the Federal Reserve themselves lose control of monetary policy and fuel another stock market crash?

On average, when a market crashes, stocks lose approximately 50% of their value in the year that follows. With record amounts of trading automation (high-frequency), and extremely high leverage levels – the next stock market crash may be the ugliest in history. The trigger might just be run-away inflation.

Stocks and Assets to Invest in During Inflation

Does everything drop in value during increasing inflation?

This is actually a much more complicated question, because inflationary recessions can further be classified into many different categories.

Overall, commodities perform extremely well in high inflation environments. Oil has often been the last asset to experience exponential growth before a stock market crash during high inflation periods. Gold is another inflation hedge, and is widely seen as a safe-haven asset (protection). 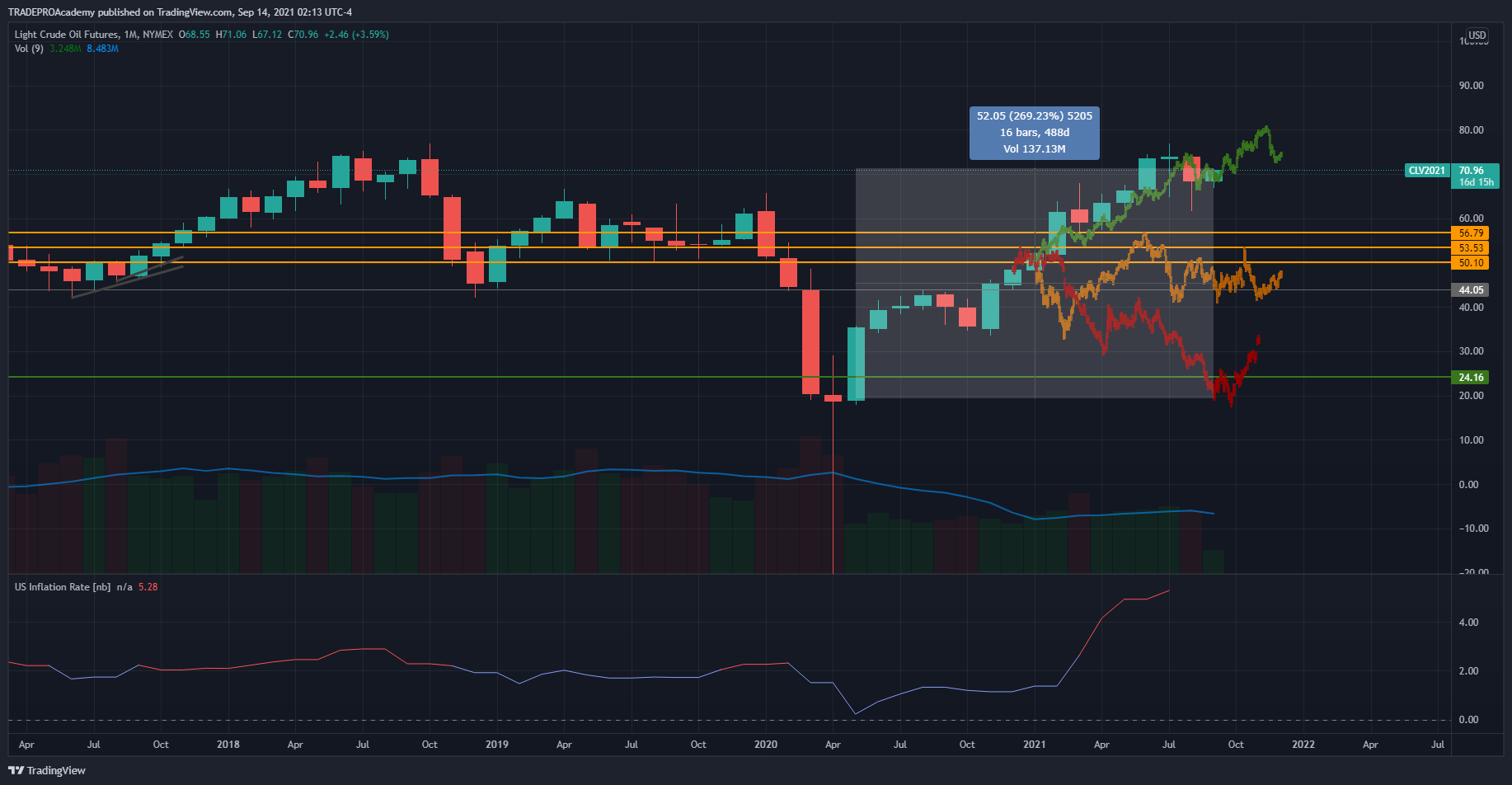 The point is that oil has seen it’s historical benchmark of going on a massive rip higher with increasing inflation. This is typical right before a stock market crash, and commodities traders are equally worried.

What happens next is anyone’s guess. Stock markets crash from highs, and never from lows. The irony of these massive down moves is that they occur when they are least expected.

We are in the biggest bull market in history for stocks, fueled by speculation, amplified by cheap money (low interest rates). Throw in the fact we have seen unprecedented stimulus from governments and central banks globally.

It really is no surprise that inflation is spiking higher. This is what worries money managers and institutional investors most this year and beyond.

One thing is for sure, there WILL be another stock market crash – and when it happens it will be a shock. It will be sudden. It will be devastating. The impact of inflation in terms of market activity and economic cycles will be normal.

One thing we are watching closely is how inflation trends in the coming months, along with how the Federal Reserve responds with their monetary policy.

The answer will come, stay tuned and stay prepared.

Want to Learn How to Trade and Invest Through All Market Conditions?

Trading and investing through an inflationary period can be very challenging and volatile. It’s important to be part of a community of traders who have experienced these market conditions before, and can stay calm and cool during these historic times. Check out our trading rooms and development program by visiting this link.