Last week a lot of Fed members spoke out and they for the most part were really hawkish. The key Fed speakers J.Powell and Bullard came out really hawkish in terms of pressing that inflation was the top of the concern. Which caused a lot of downside in the overall market, especially into the end of the week.

In the coming week we have: 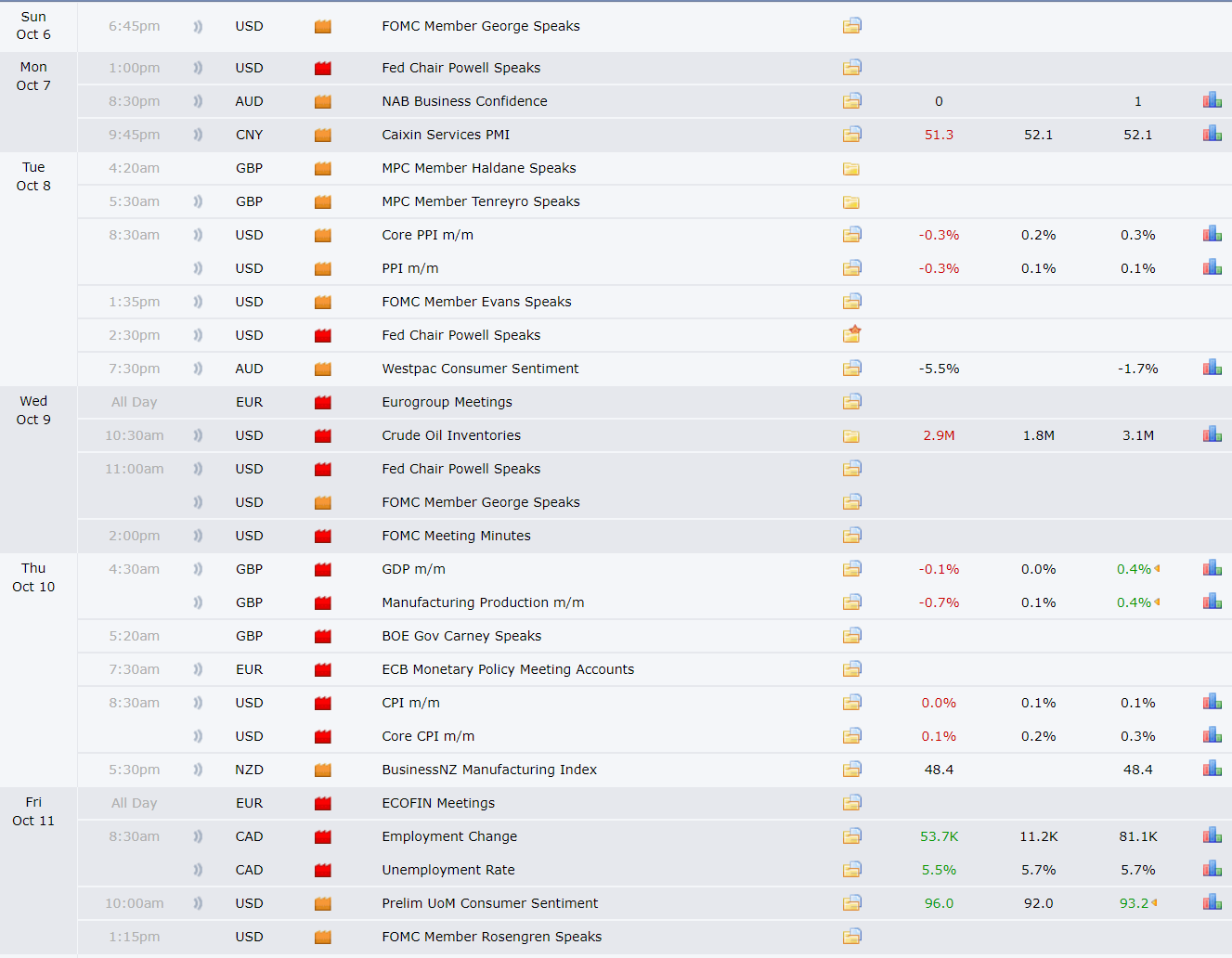 Still sitting in medium and long term negative territory, we had a large slip through lows last week into the end of the week after struggling to pop in the beginning of the week, this is a real bear. The volume on the downside was a lot thicker as well. We closed at lows of the year 357 or so and we’re moving into the next distributions and areas to the downside which are to be found at 340/42, that is the next large support and target. 366/367 is the first huge resistance level this week that will have to hold out for the bears. Above we have a distribution block that can accept and push us into 375. Would probably take some kind of catalyst to get that buy stop run though. 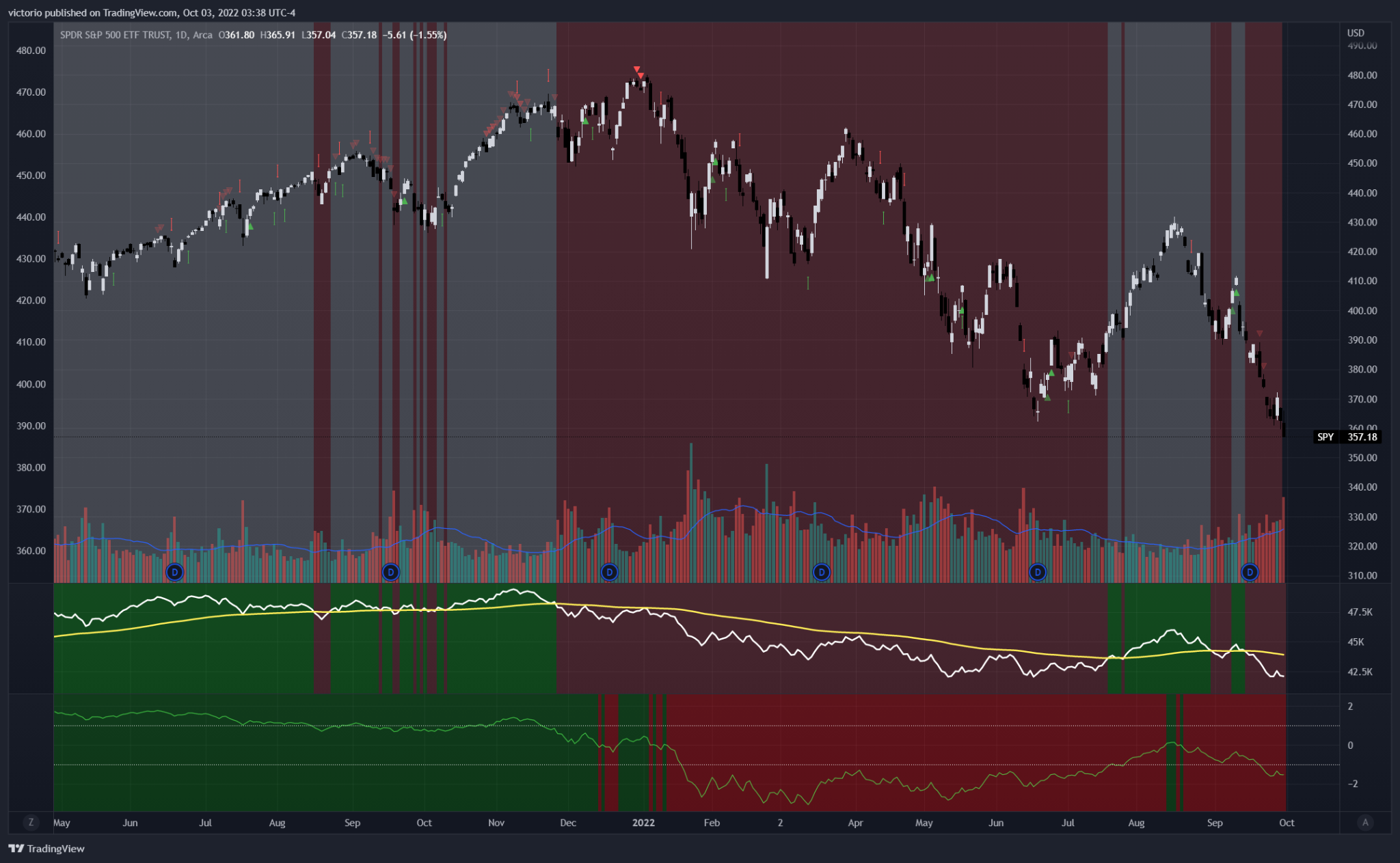 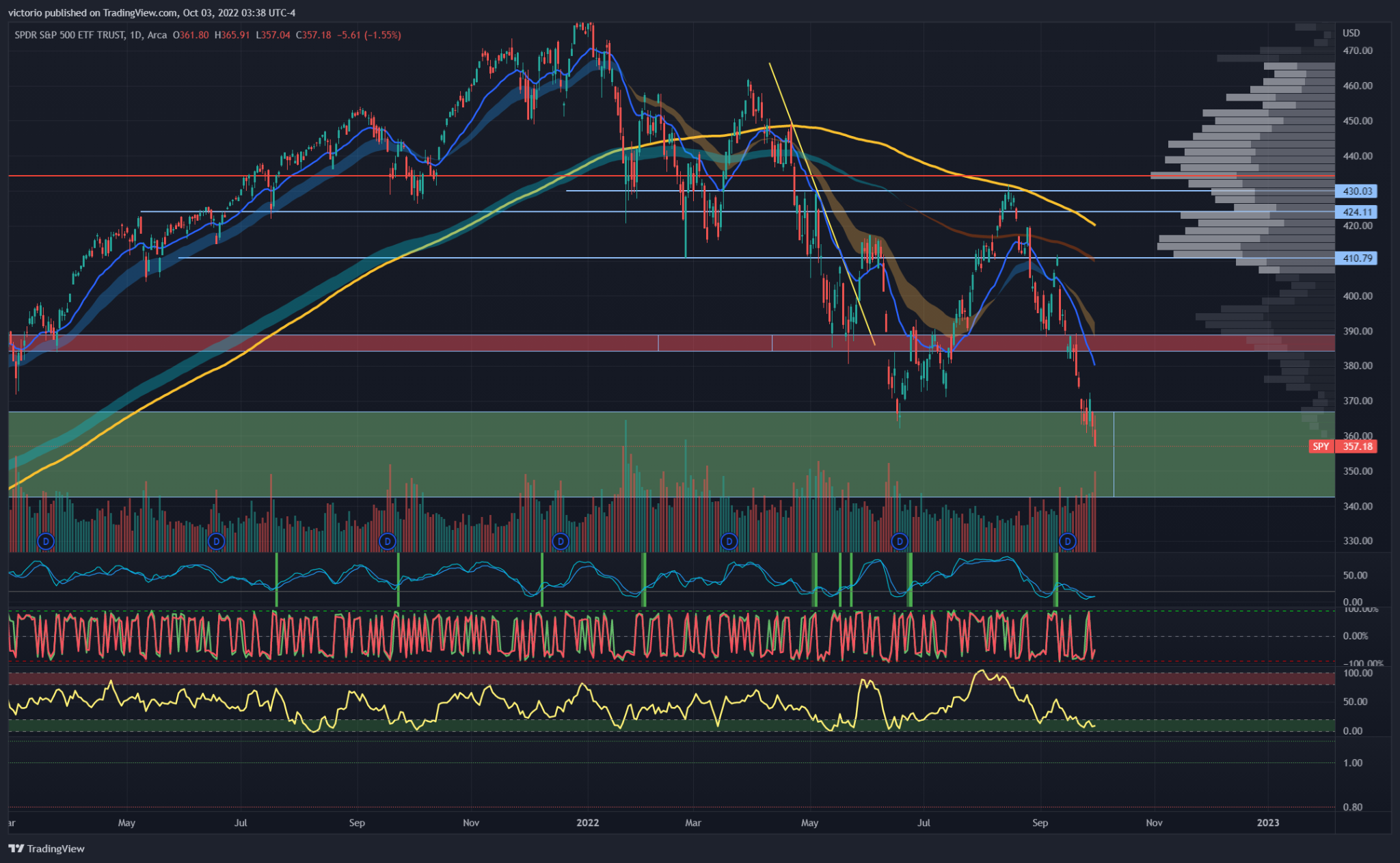 Overall breadth is pushing into the low territory and sitting at oversold a little too long it seems, it can persist, but the oversold period is holding oversold without too much of a catalyst. Which usually results in a pop. 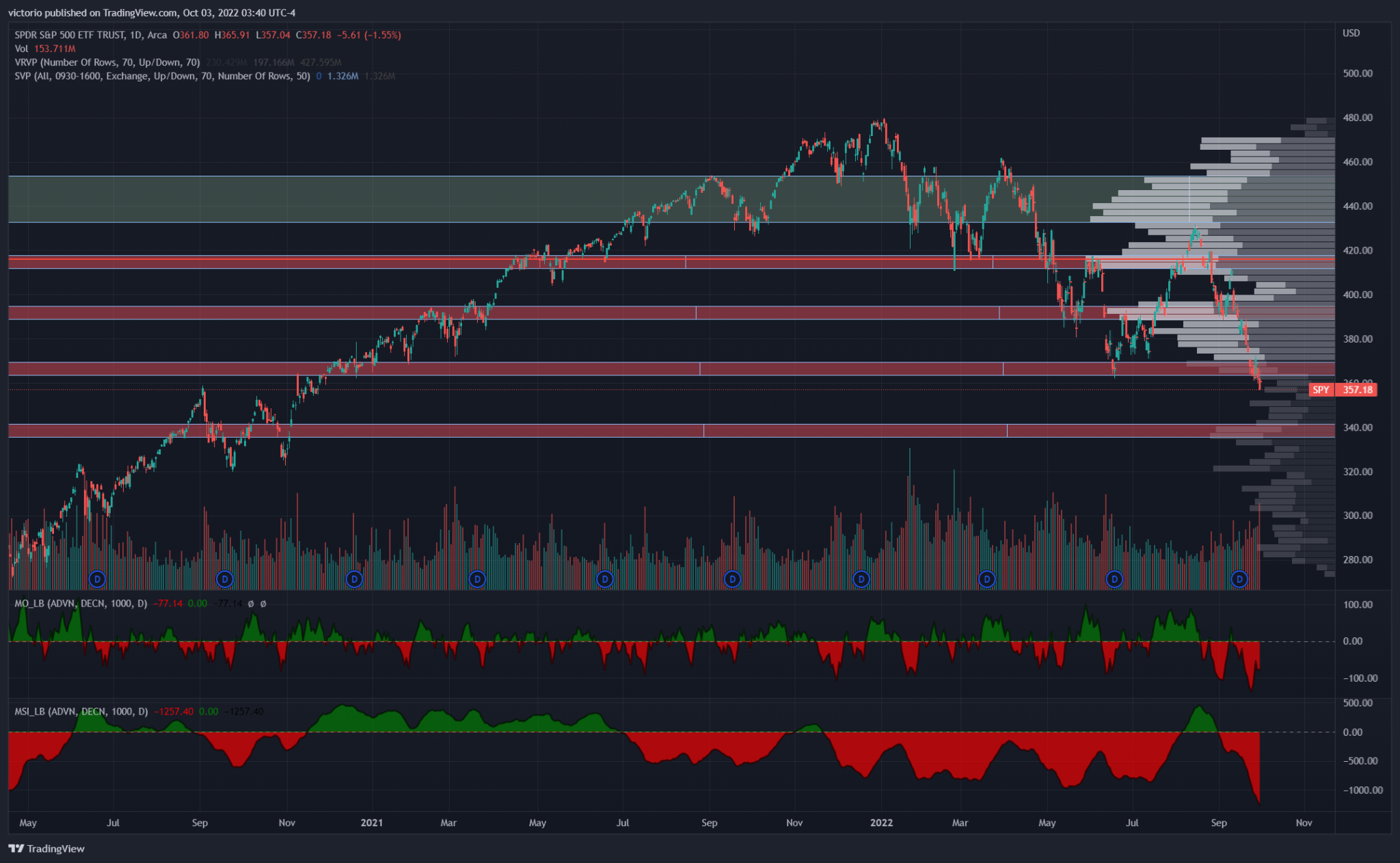 Big tech is now down nearly 34% from the start of the year and even though weak, didn’t break the lows of the year that aggressively. We’re at a huge inflection point of 267 in QQQ where under we have a large VP ledge that can open to the downside and push prices under into the 249 ledge, 235 and 220. Those are all the LARGE ledges to the downside where price can target if we lose the large distribution, the longs will have to show up today to at least stall those targets getting hit, because there is a limited volume that will hold prices from falling down. The volume has been really thick to the downside over the last week. The McCllelan oscillators have been really bears on the short term and medium term. The medium turn positive for a split time when we got that larger buy stop move, which was the first that we’ve seen all year. Didn’t last long. 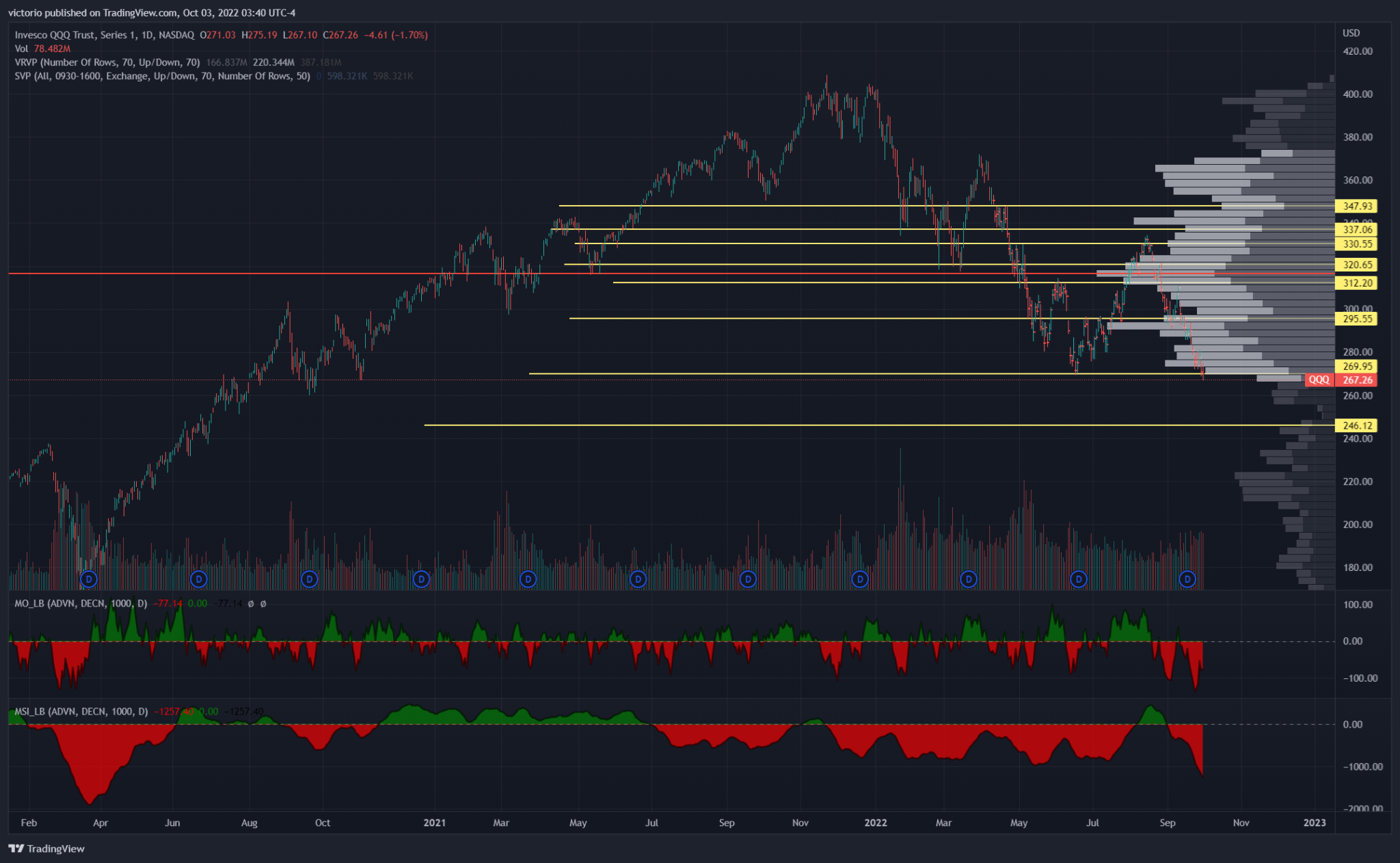 Futures broke through the lower end of the distribution block to the downside this last week. There was a few attempts to break to the upside which I wanted to see attempting 3725 and 3745 region. The failures there suggested weakness. 3632 was a key pivot for the longs to hold, the break end of week suggests more weakness. Once 3615 was taken over Sunday night it was lights out for the longs. The distribution block is now between 3638/42 and the top end 3716/18. The start of the week the bears are going to try to hold 3615 and the distribution start closer to 3632 resistance. The levels to the downside 3592/93, 3573 and 3540. seemingly doubtful the bulls really come through this week with all going down and potential combustion out of credit Suisse. The bulls only chance is through the 3639 distribution. 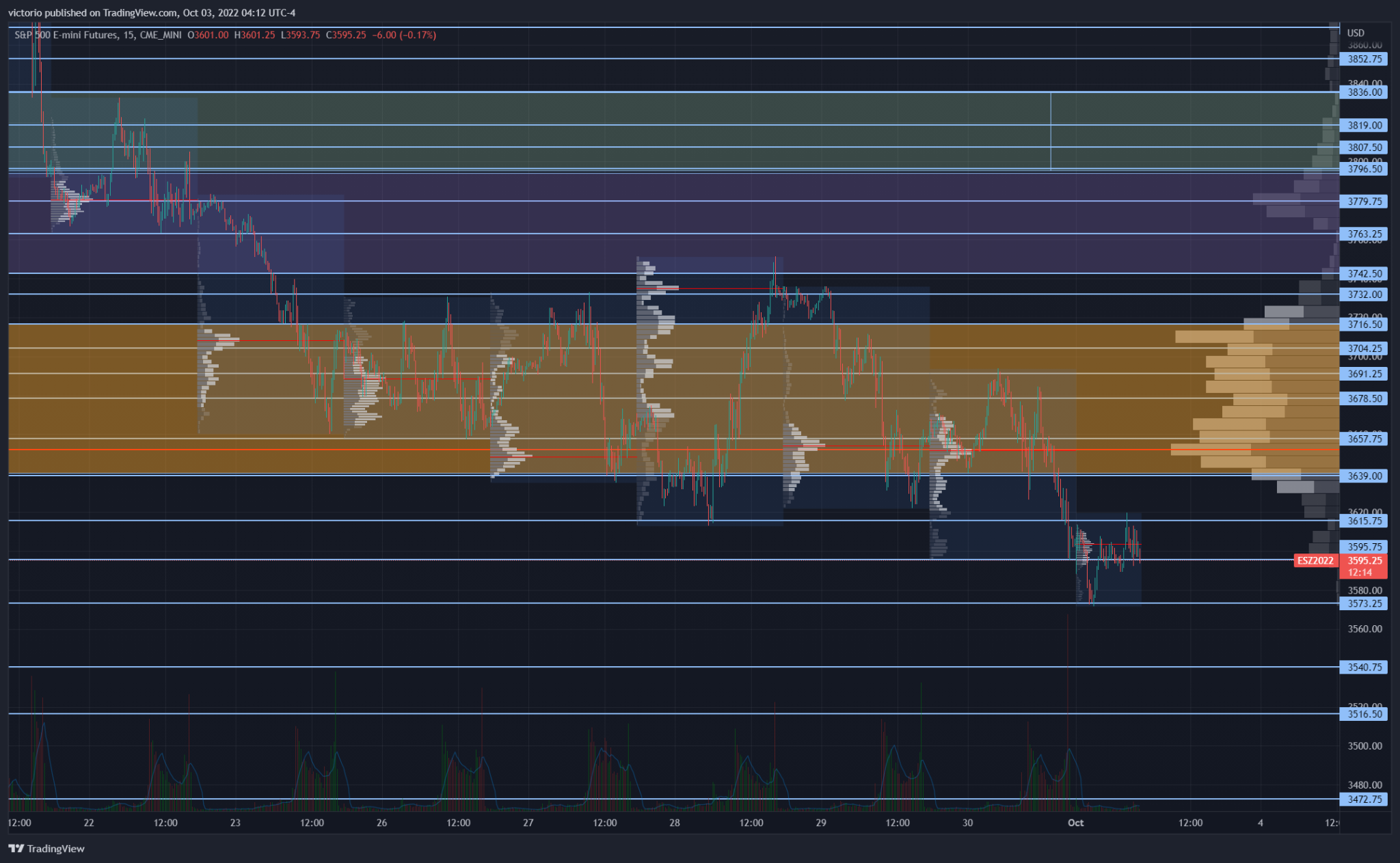 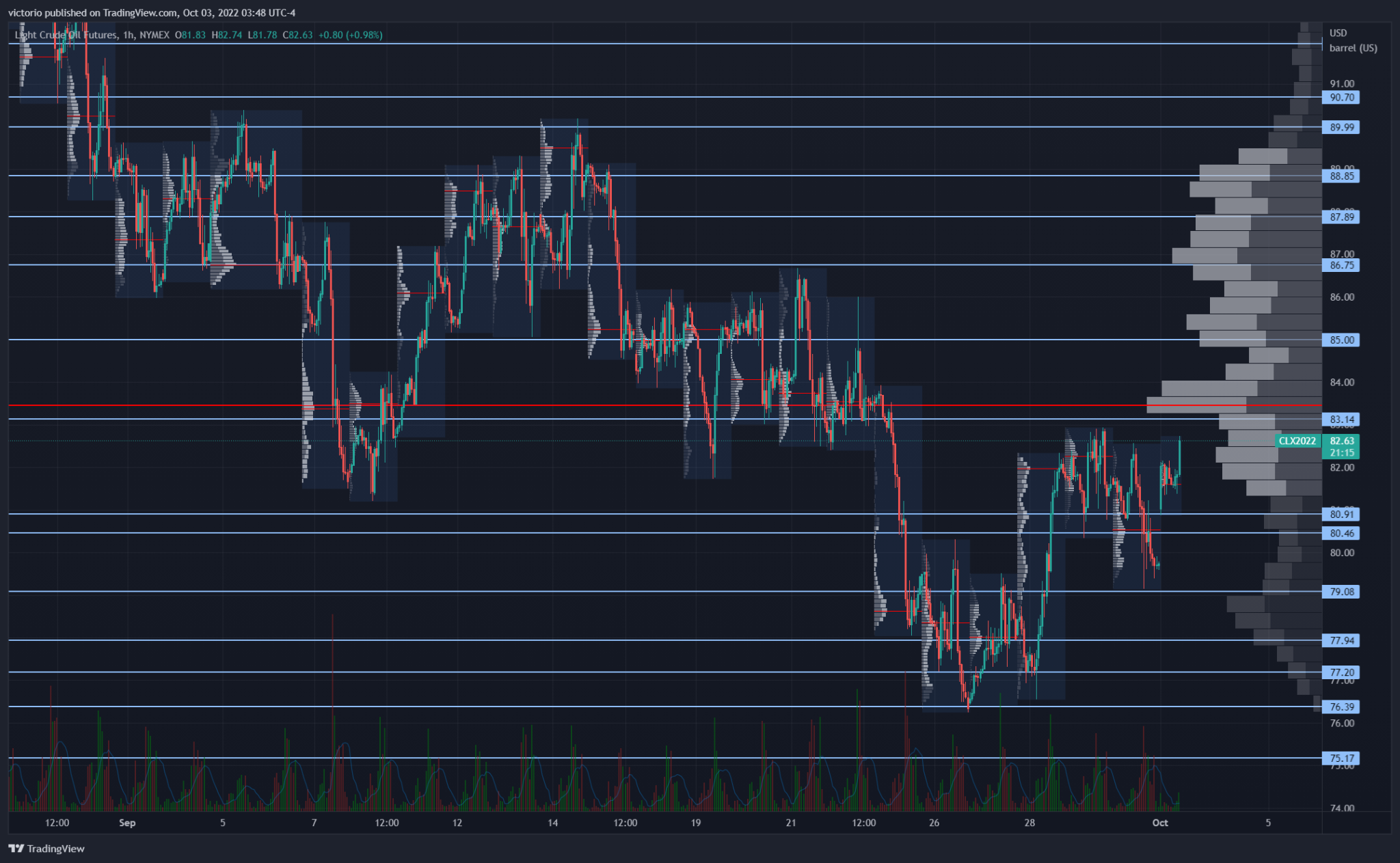 AAPL accepted under the key distribution supports finally but not into the yearly lows unlike indices and other tech names. Sub 151.50 was a big turning point then we had sub 145 next we 135 area is a huge ledge. We lose that this week the markets going to spill hard. 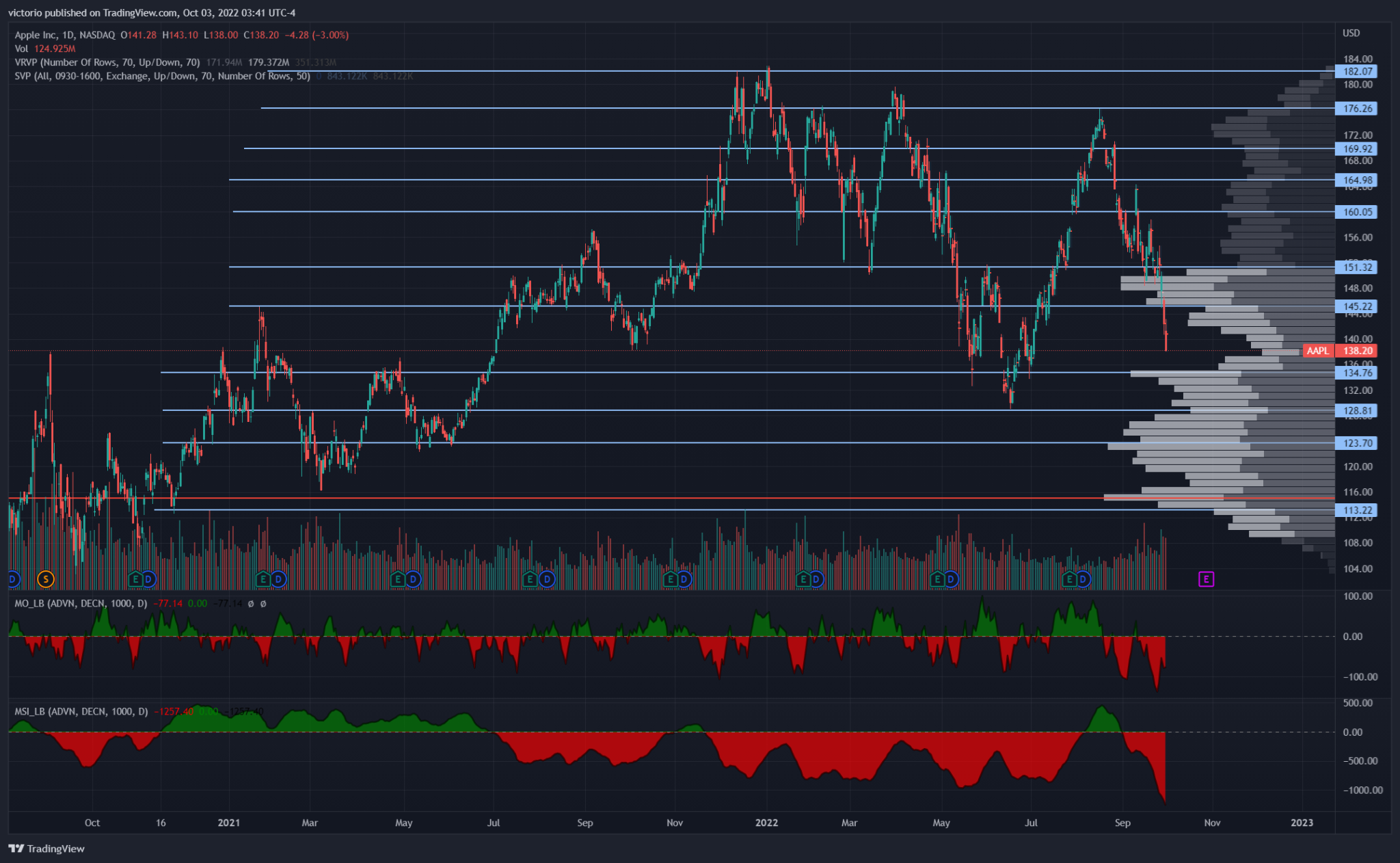 IWM tried to hold the 163.50 region this week with a partial bounce to start the week after trying to buy the support three days in a row we failed at distribution too close to 170. The support hasn’t broken yet and small caps tend to lead, with a break of the yearly lows other indices can get sent lower. 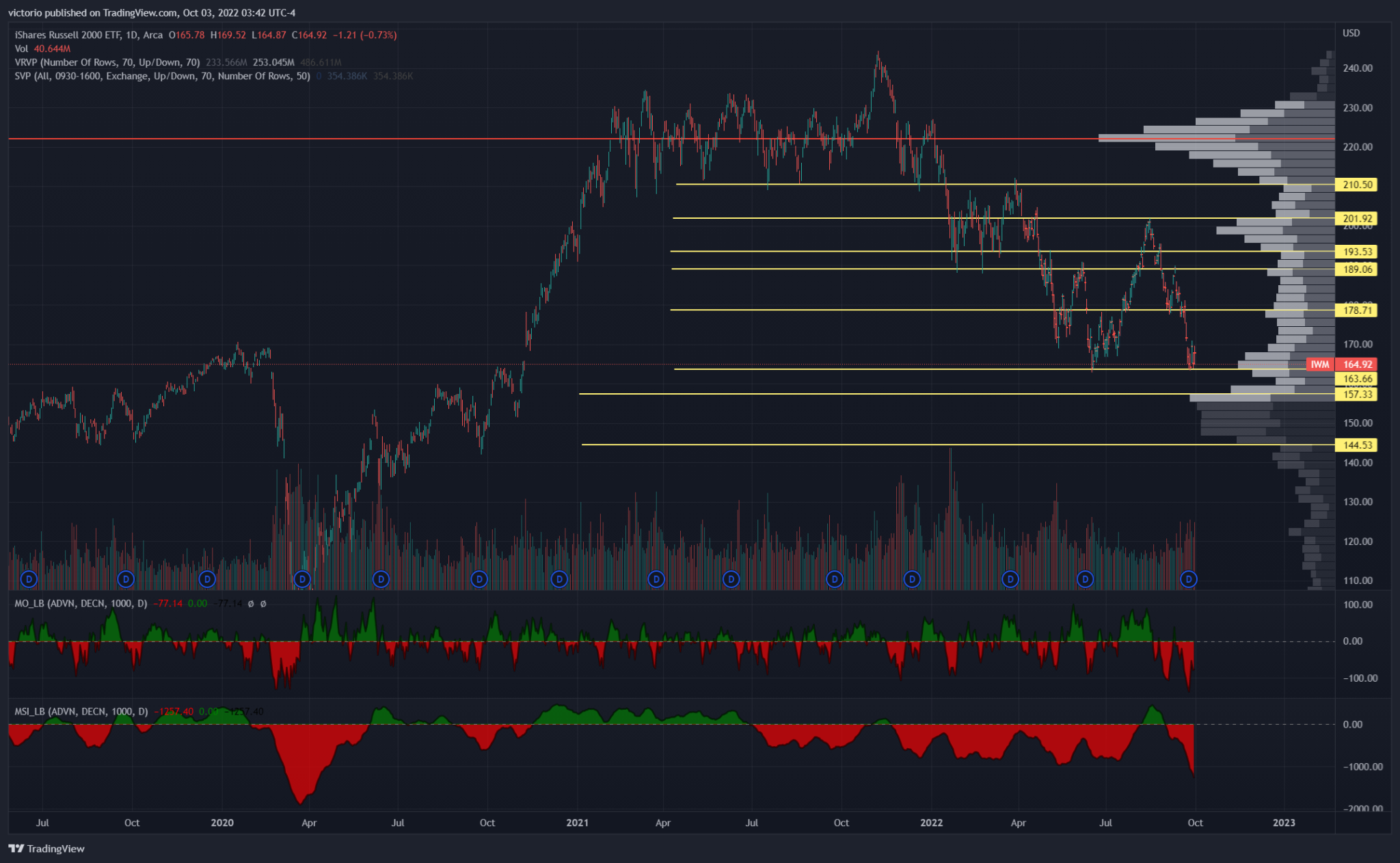 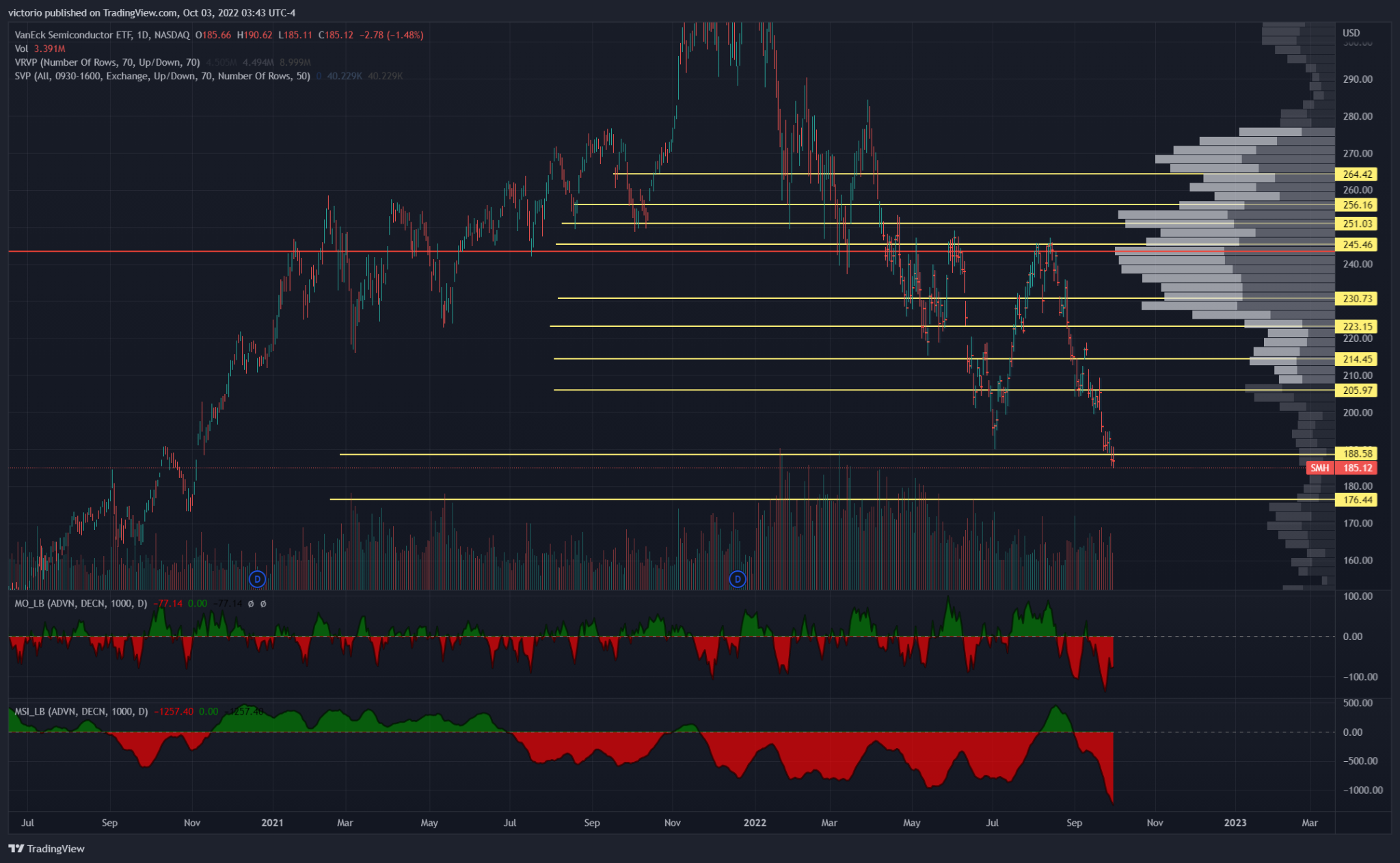 AMZN is holding up fairly well as a big tech name, by that I mean not at yearly lows.this last week we broke 120 which was a key ledge for the market. And now down into 111 another key ledge and the start of the lower band distribution which can take us into the 102 region. This is a massive support at 111 that would need to hold for the bulls but fairly doubtful this week. AAPL and AMZN are the last dominoes to call it would seem. 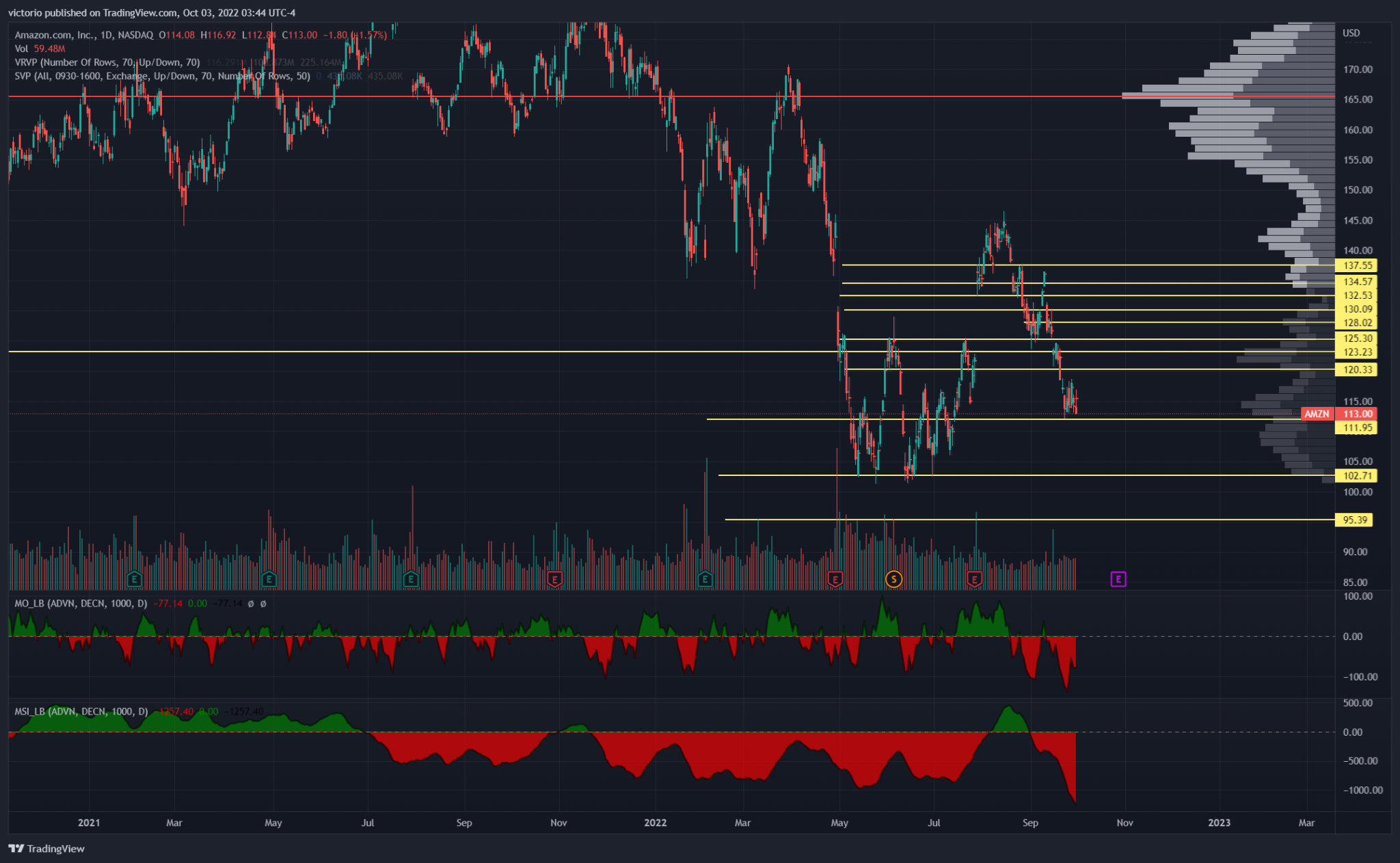 GOOGL keeps dumping through distributions to the downside. Breaking 105 was the starting point and sub 101 was the tipping point to open the downside into 89/92 region. That’s the next target as 101 held resistance hard this week. 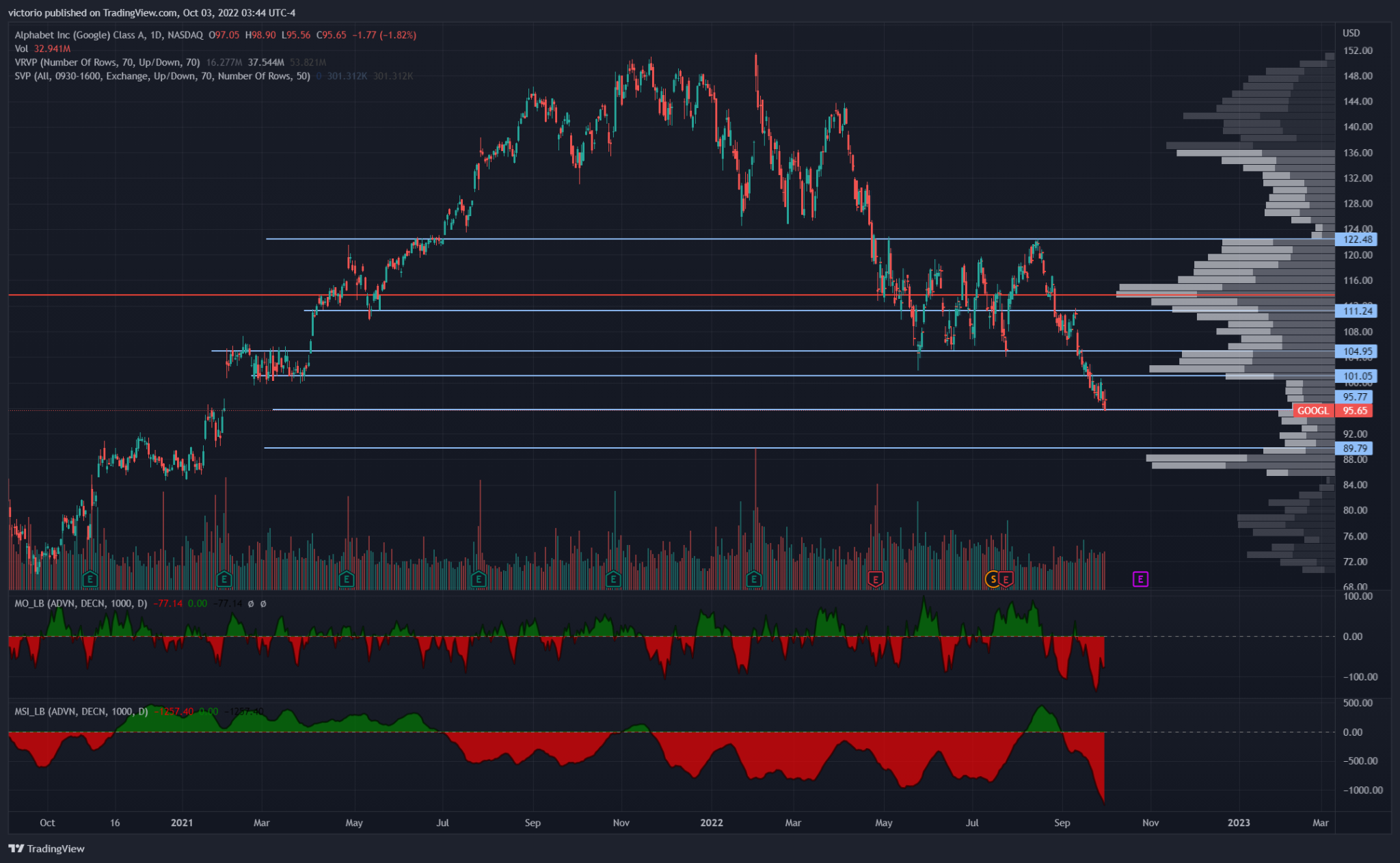 US Dollar has been on a tear this year and time to shine a little more light on it, usually this would be good for the economy and pressing the overall market higher however this time around with inflation higher, global economic turmoil in the eurozone, asia and the UK. The pullback in the dollar and eventual drop will probably help signal the final downside push and bottoming.

There is naturally the Fed to blame here with the rising rate environment before other economies started increasing their rates making the dollar stronger relative to others. But there’s also the global geopolitical issues that are causing investors to sell other currencies like the yen, euro and pound to buy the dollar… 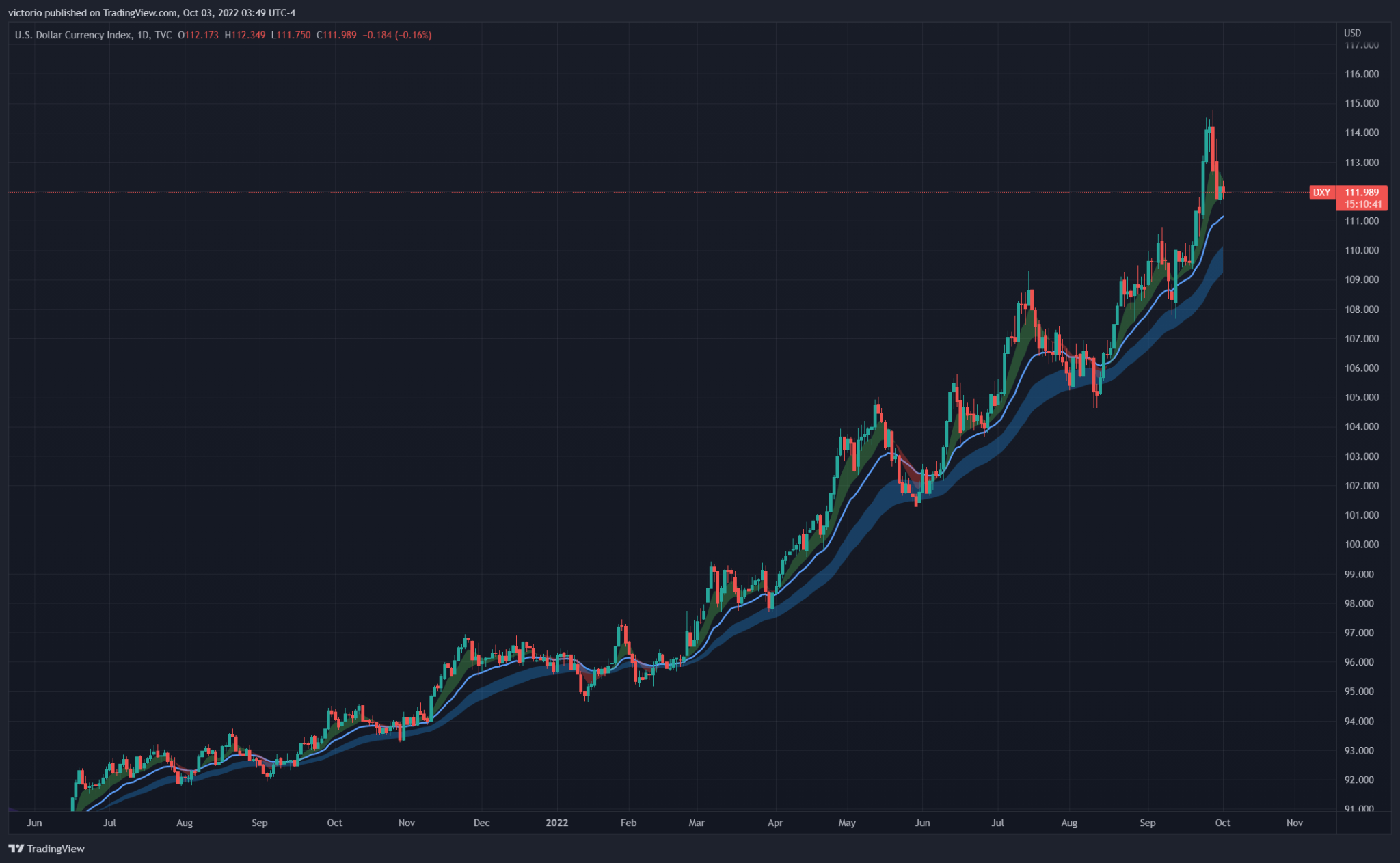 VIX finally popped this week after reports of JPM and other big banks manipulating the product, even with that let’s say VIX should be closer or 40/45, we haven’t seen max dead and panic yet which would send VIX to 70 or so. 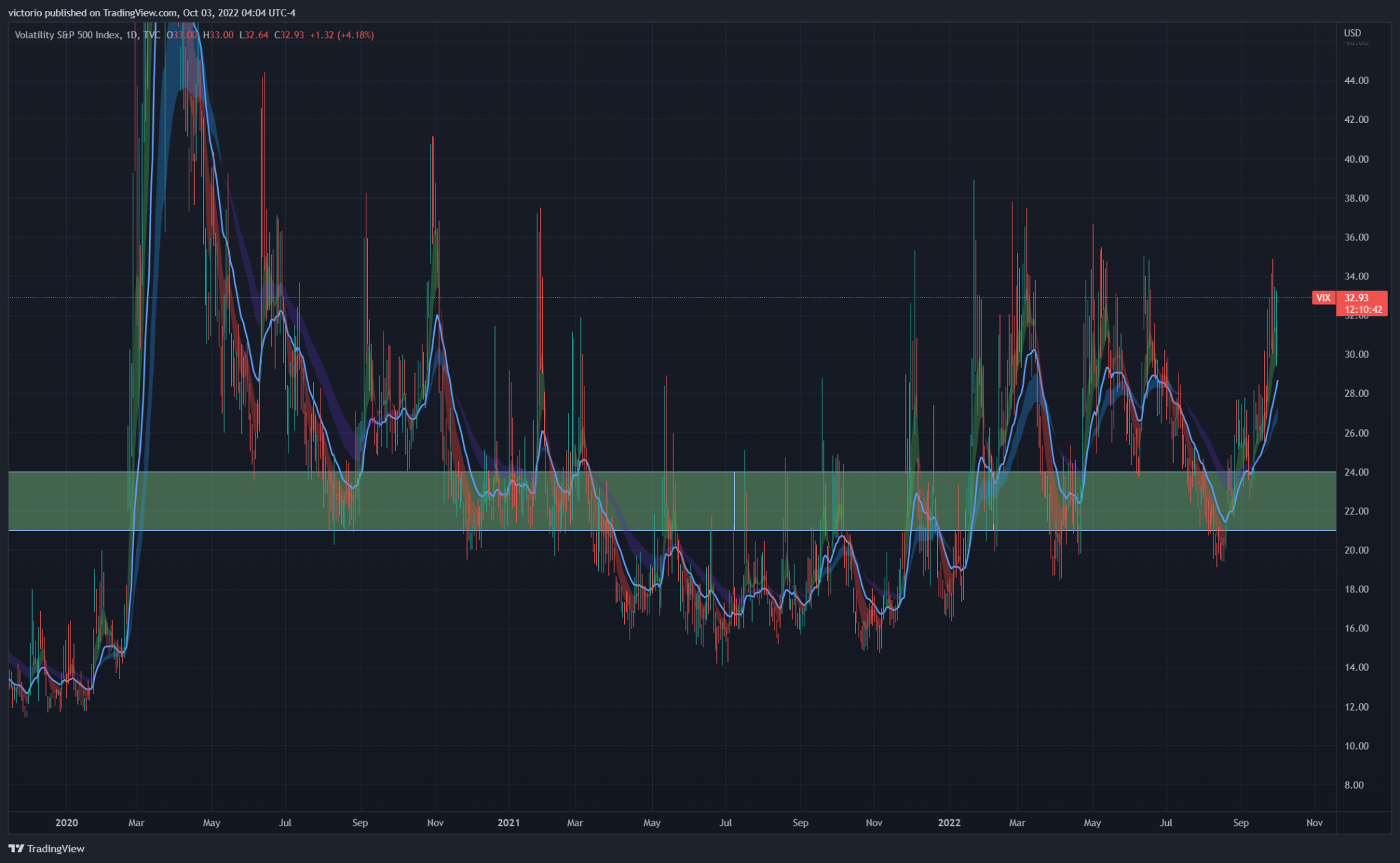 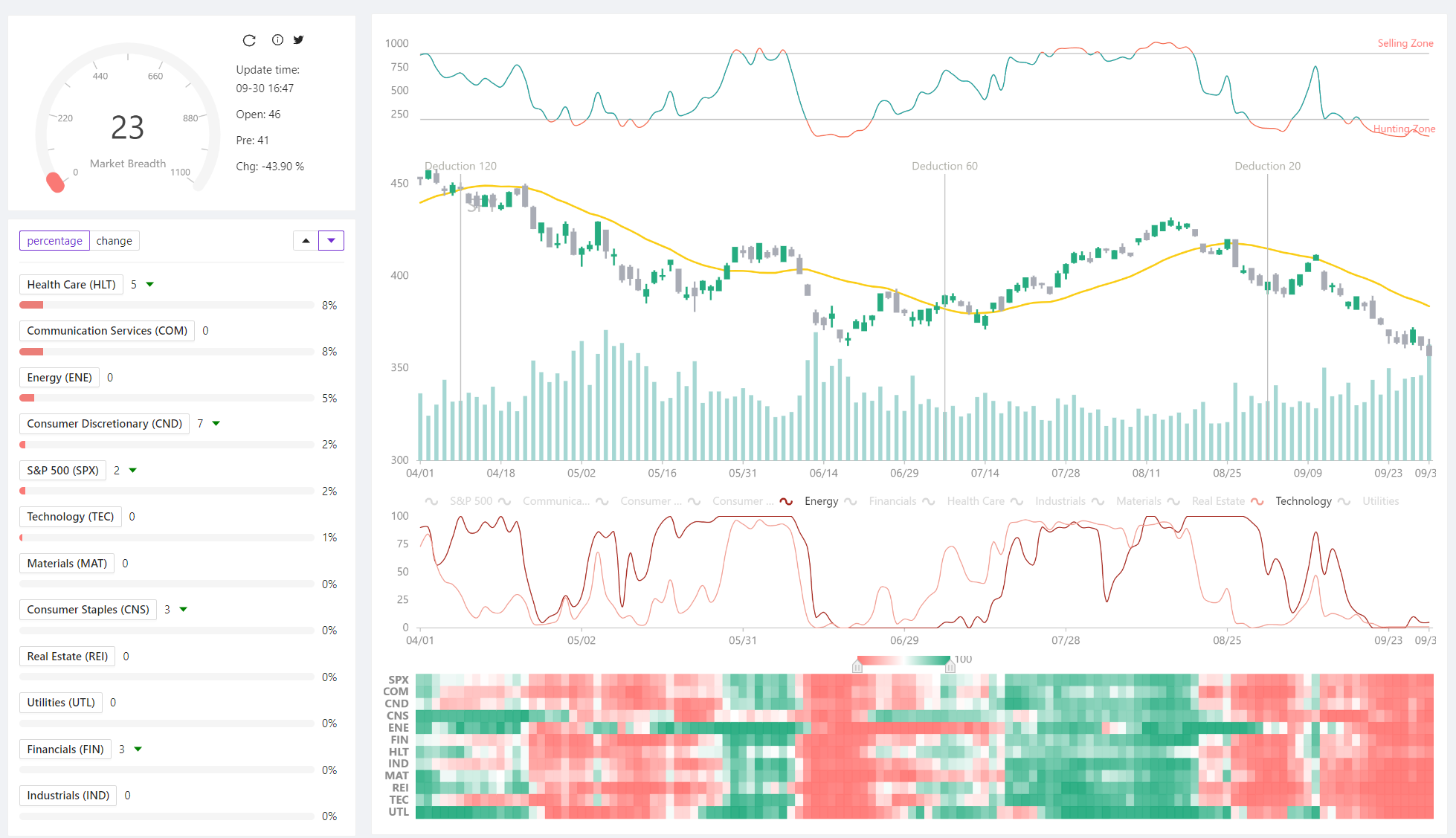 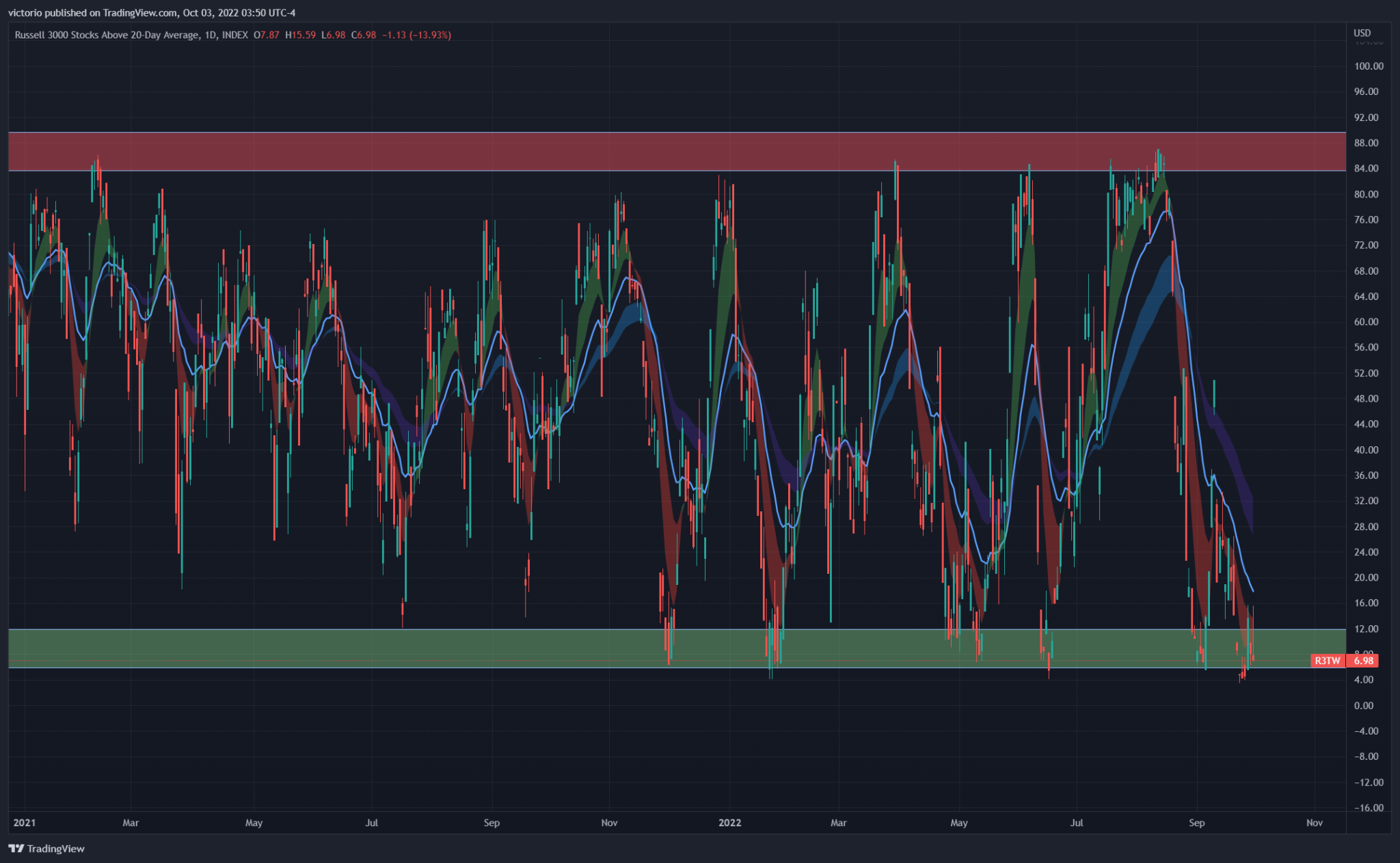 Overall breadth is extremely low which can induce a pop in the coming weeks. It’s just that breadth can stay like this for extended periods of time with the market continuously slipping. 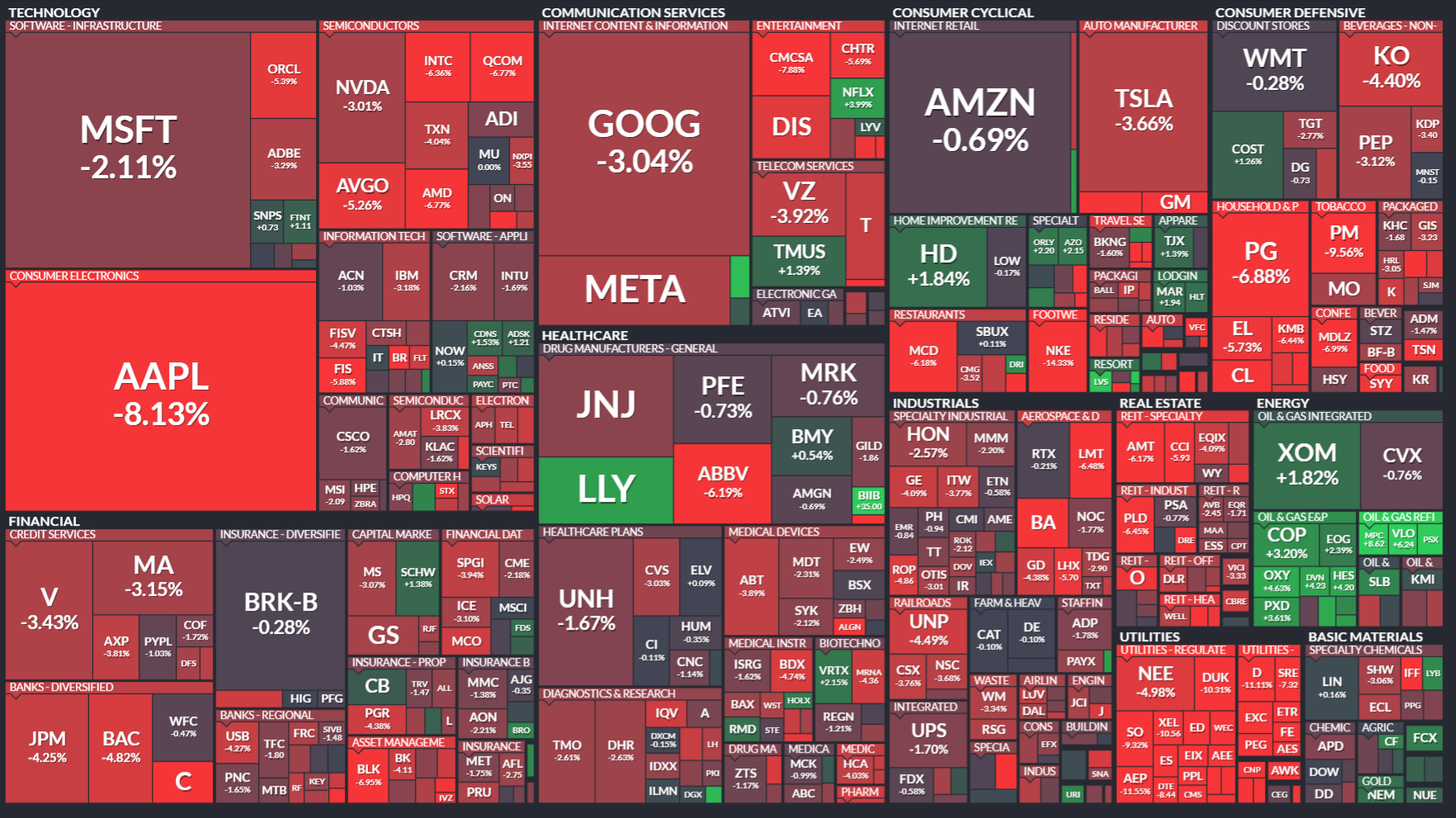 COT commercial paper finally took a larger sell but still pretty positive. There needs to be a large extended sell in this paper and to 0 if we’re going to see capitulation to the downside. This does suggest more downside into the coming weeks. 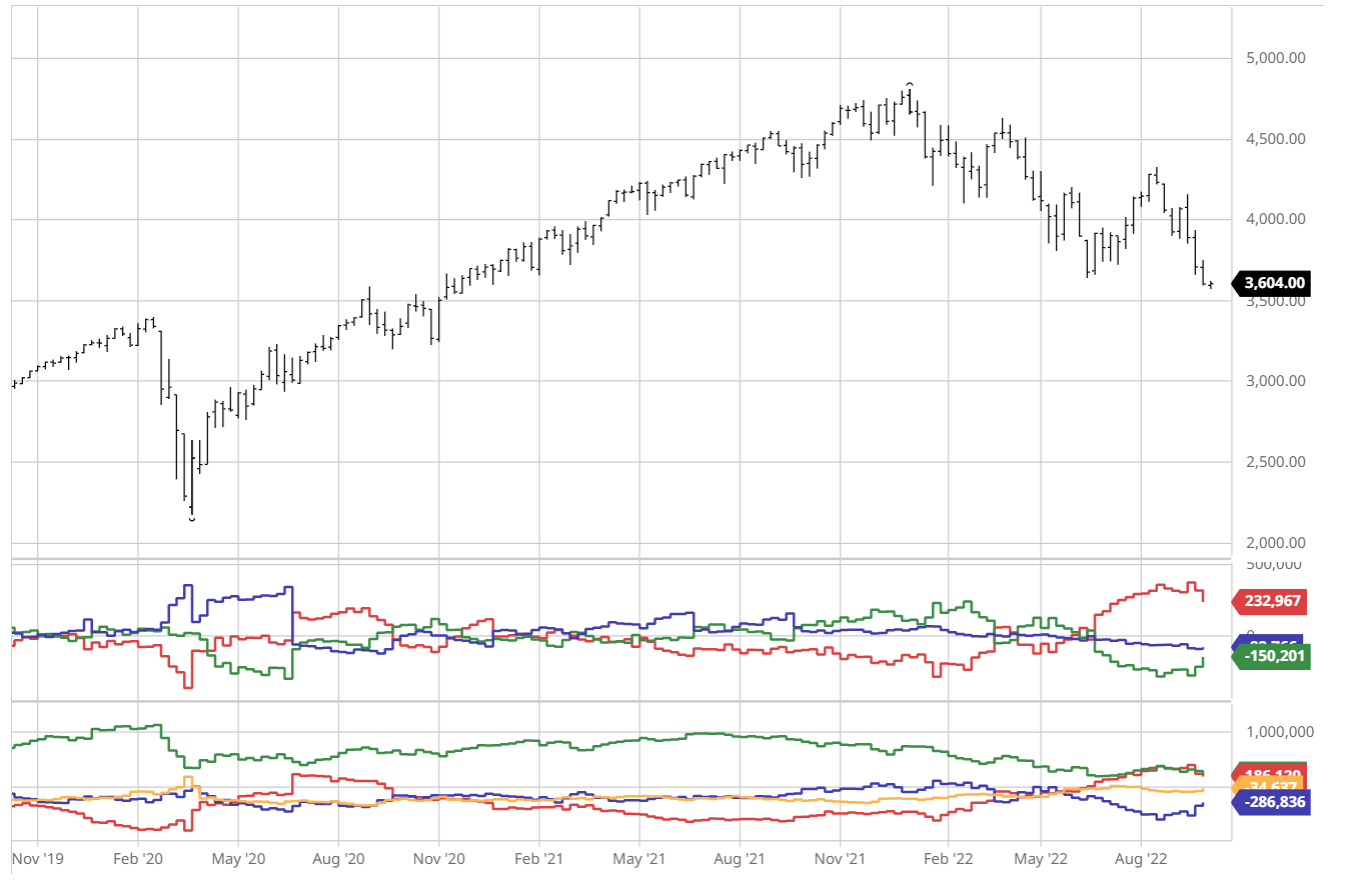 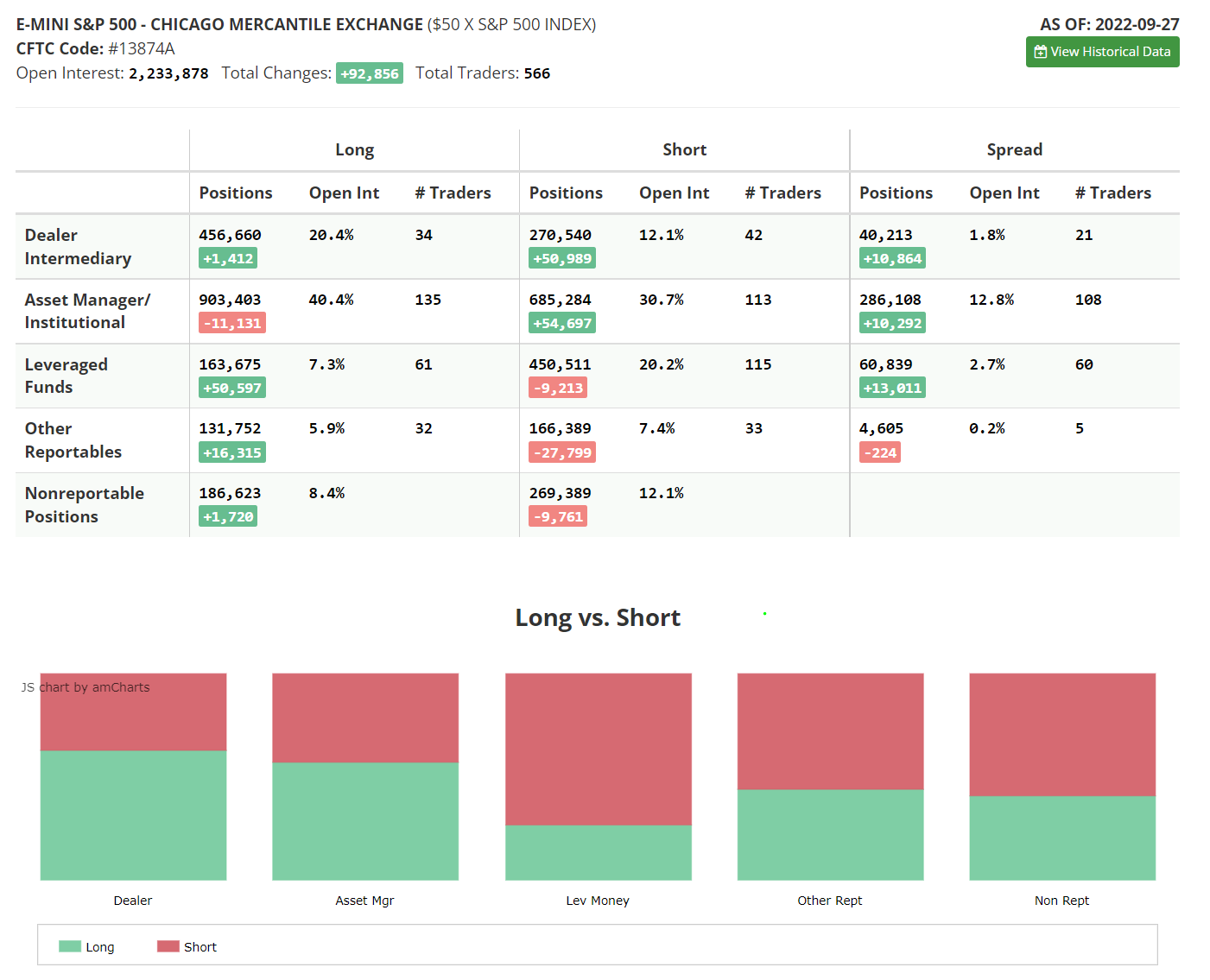 4. Analysis of the week (Options Positions)

net positioning in banks is bearish and growing consistent and deeper, which is why we were looking for end of year puts on JPM and other banks. There is more potential downside with rumors twisting around of Deutsche and Credit Suisse going to combust, even American banks are in dangers of larger sells. 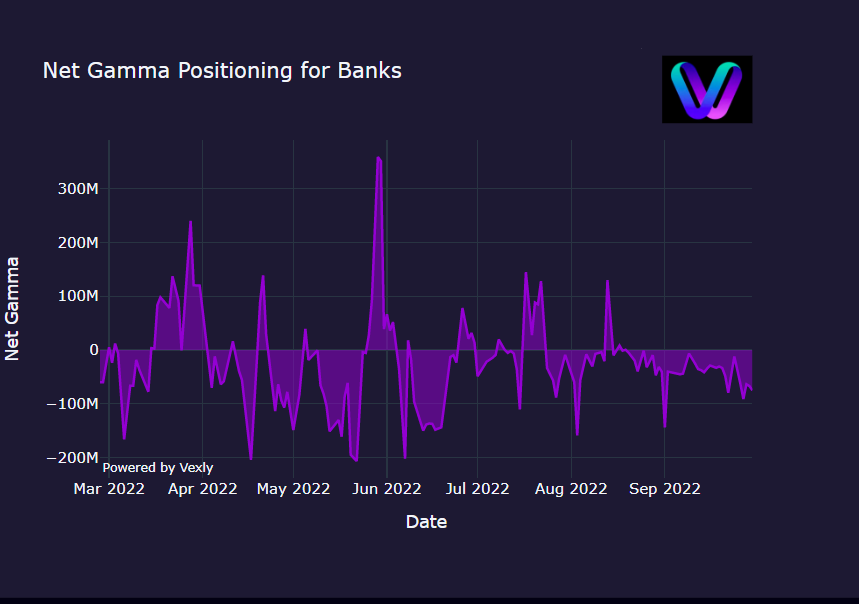 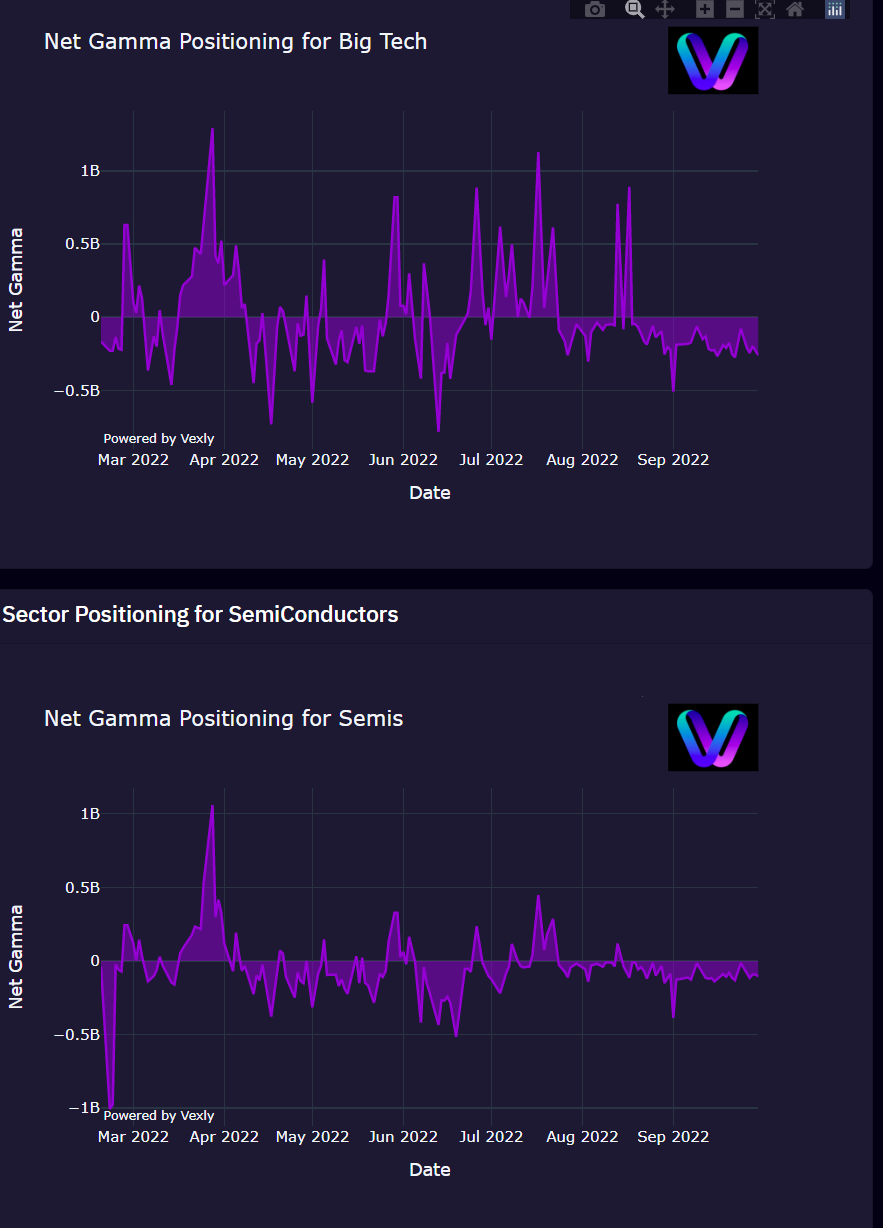 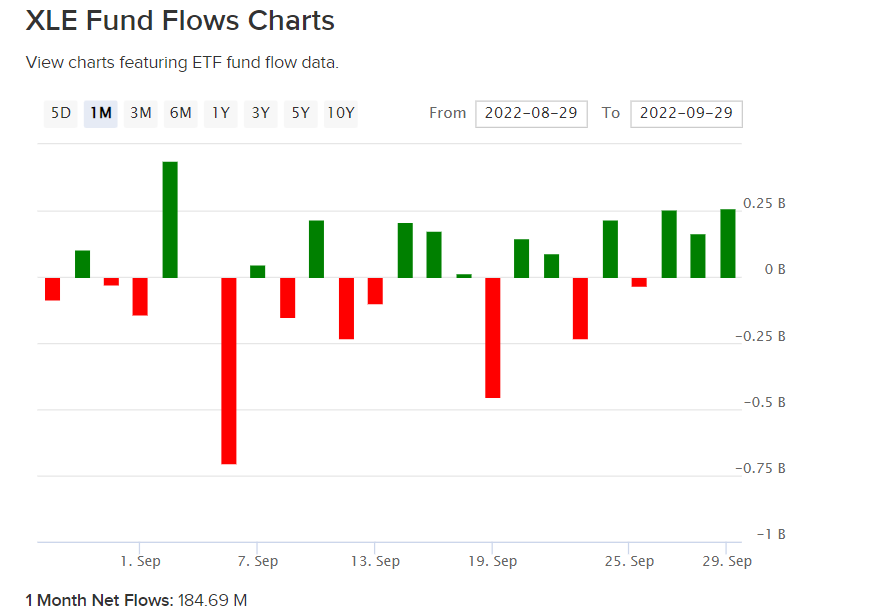 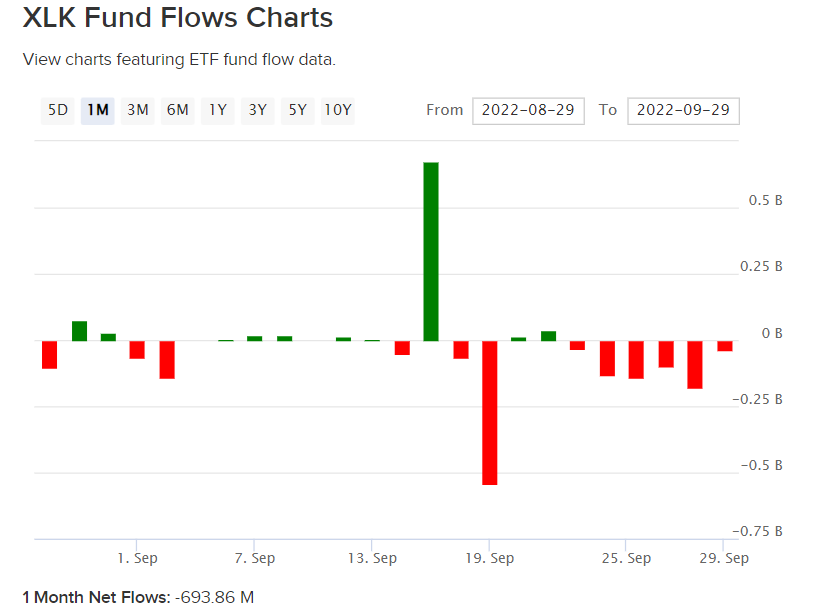 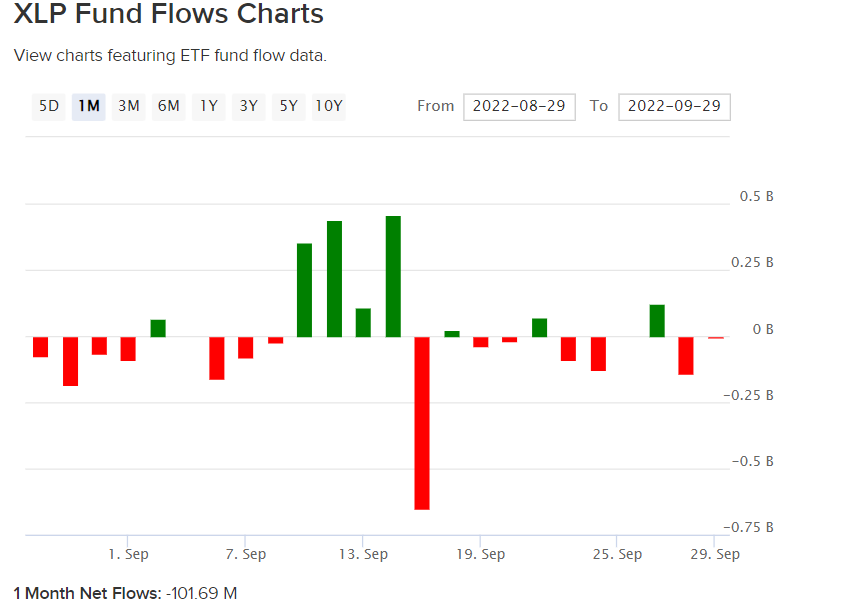 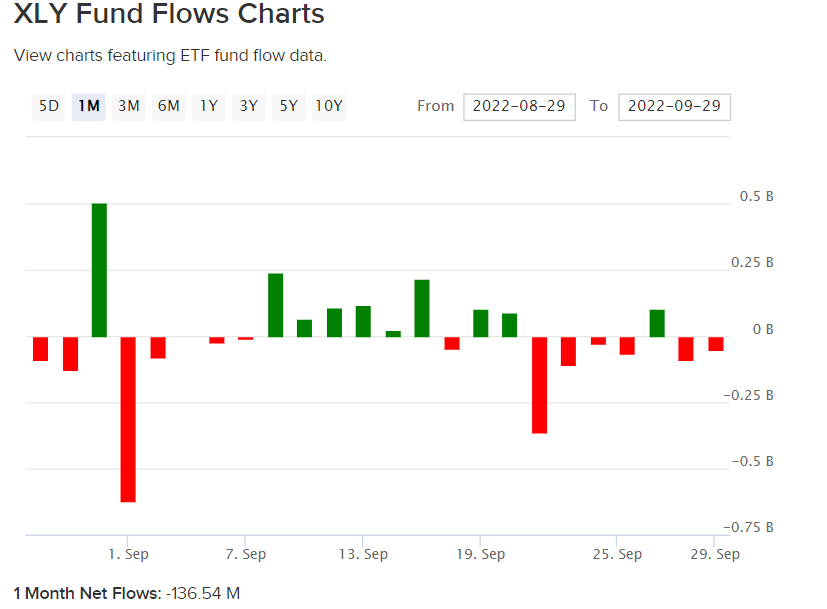 This week I’m looking for some more sell, october generally comes with big sell which can also bring capitulation but we would want to see a catalyst for that to shape up and global macro economics, the fed and now big banks globally on the brink of potential collapse we could see that catalyst.

It’s hard to time market bottoms but we could start nibbling in ETFs and leverage into the 340/335 region before 320 in SPY.

As long as SPY  holds out resistance this week sub distribution block under 366/367 the sell should hold. There’s an immediate level at 362 as well.