The Federal Reserve just cut rates 1.75% in a matter of weeks in March 2020. This has sparked a lot of panic in the US and the world as Coronavirus fears continue to increase. From a virus to the monetary stimulus?
First, we have to understand who the Federal Reserve is and what they do. Next, how the Coronavirus has affected the global economy in order to understand how the combination of the two has potentially propelled the US into recession and what can be done about it.

The Federal Reserve usually works closely with the president of the United States. Currently Donald Trump. This time around, Mr. Trump has been putting a lot of pressure on Fed head Jerome Powell to keep the market pumping to help Trump’s image as the best president for the markets and US economy.

The current Fed head is Jerome Powell, dubbed a Dove but has made his decisions based on the health of the market. The Federal Reserve is made of a board of governors. Not one single governor has the ability to change rates or inject money into the economy. Quick fact, the Fed injects money by buying bank treasuries. There are 10 committee members and other alternate members. Before we dive into the current conditions, what has recently happened and what’s to happen going forward we have to get a little insight on the Coronavirus.

The Coronavirus is the most recent pandemic, dubbed so by the World Health Organization. A virus that is said to have originated from Wuhan, China and recently in March 2020 spread throughout the world. The pandemic has caused the economy to take a hit and financial markets to get hit into the bear market territory. The main effects leading to this are countries shutting their borders, companies closing down and nationwide quarantines all throughout. The economy has suffered in many nations and a lot of companies whose earnings are not yet released.

Take a look at the chart below, this is when the pandemic began to show its colors and effect on the market. The S&P 500 is said to reflect the health of the US economy. The Federal Reserve has been said to be data dependent. Meaning that they make their monetary policy decisions based on the economic data points that come out of the US. Employment number, housing starts, etc. However, it seems like they’ve been basing a lot of decisions on the health of the S&P 500. Mainly cutting rates to add stimulus to the market. What do low rates mean? Cheaper borrowing, attractive to investors to put money into the market where they’ll yield more return. 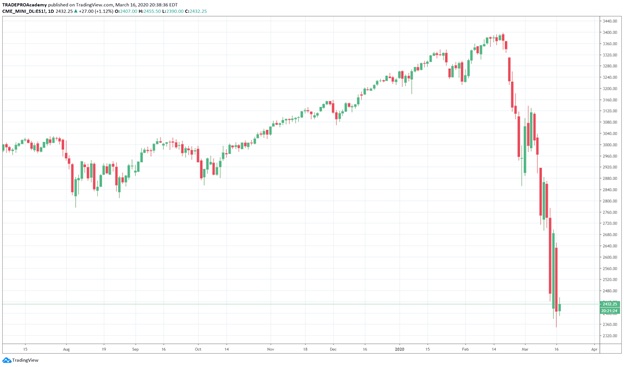 The recent drop in the US equity market pushed the price down 30% from all-time highs. Erasing all of the gains from the prior year. And what has the Federal Reserve been doing? Cutting rates on the way down. The Fed rate is now 0% from two surprise cuts in March.

Expectations for the Coronavirus outbreak?

As is, the US congress has passed a hefty bill of $8.3 Billion to combat the Coronavirus outbreak. Mainly for vaccine research and other measures. The US House has also passed a multi-billion dollar bill in order to expand safety-net programs. This is protection for those that may be affected by the continental shutdown. Those who may lose work, or temporarily be put out of work which will cause wage loss.

We are expecting the outbreak to continue in the US and other countries. More cases to emerge before we get accessible testing. Which is expected to deteriorate economic and business data at alarming rates. The policy responses to this crisis are very likely to become aggressive in the coming weeks to combat this.

The Fed’s current assets, and role.

The Fed has an extensive asset list that has been expanding exponentially. Between 2007 and 2014 the Fed has increased total assets from $900 Bn to $4.5 Trillion, an increase of 500%. Which didn’t really cause a huge increase in CPI levels or inflation? The Fed currently holds $4.2 Trillion in assets. Which could propel the Federal Reserve to increase its balance sheet by a couple of hundred percent. If there is an increase of 500% then we will see their total assets increase to $21 Trillion. This gives the Fed just under $17 Trillion of ability to buy Treasuries and support the economy in different ways. That is only if the Fed decides to increase assets by 500%, probably not the highest probability scenario. Last time around that “printing” of money did not cause inflation but it might this time. Maybe not. This inflation that may be caused is a better case scenario than having deflation and an economy in turmoil due to large unemployment.

Over the last few weeks, as markets crashed from highs, down about 30%, $9 Trillion in US wealth was killed. Should there be a further downside, then the negative wealth could spark the next, extreme recession. Which gives the Fed one option, although not the friendliest; intervention to increase stock prices.

If the Fed buys stock directly, increasing its assets and financial asset prices, then we could see a prop in US wealth. What happens if they announce that they will be buying a lot of stock? They won’t have to because every wealth manager and investor in the broad market if not the world would begin to buy stock. That is what Kudlow announced in his plea to the public. This forces investment managers to do so if they want to keep their jobs. Otherwise, their funds would underperform.

What has the Federal Reserve done so far?

The Fed has taken action. On March 3rd the Fed cut in an emergency announcement. The Fed cut 50 basis points taking the Federal funds rate or Fed rate down to 1.25%. This was an emergency measure as markets were diving, which has been the protocol in past recession protection moves.

On March 6th, Boston Fed President Rosengren made the announcement that the Fed should change the Act under which they proceed to be able to buy different assets, stock maybe?

On March 10th, liquidity was added, increasing repo injection from $50 Bn to $175 Bn. Adding liquidity to banks and the market. Shortly after liquidity issues surged as different maturity treasury yields were misbehaving according to expectations. Which caused the Fed to act again. Announcing a $500 Bn offer in a 3-month loan, and another $500 bn in 3-month loans. Then leading off with an offer of $500 Bn in 1-month loans. Not much of this money made it to the market.

QE5 or QE4 depending what people want to call it… had begun, by implementing more buying of Treasury securities. Considering QE4 had begun when the Fed started buying $60 Bn in Treasury bills last October. We could see continuous QE being implemented. If the Fed decides to start buying stock… Not to mention that they’ve just launched a $700 Bn QE package!

The Fed and Jerome Powell have not only cut interest rates to 0% but they have also been supplying a lot of money to the market. Just take a look at what happened below. The Fed rate came back down to 0% near the levels of the last crash. Each time the Fed has cut supper aggressively, we’ve seen a market crash or recession just after. In 2008/09 and also in 2000 and the prior years. 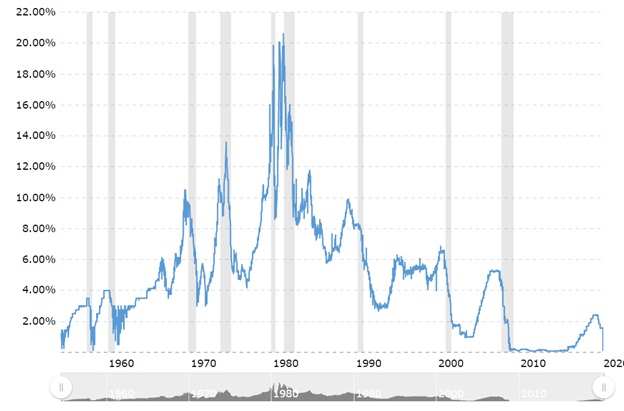 What should the Fed do to prevent a recession?

It seems like there isn’t too much that they can do at this point other than the mentioned above. The Fed has the ability to add more stimulus to the market in QE packages but how far can that go considering that the $700 Bn packages did not really help the market rally much. In fact, the market dropped nearly 13% the next day.

The issue with rate cuts and cutting to 0% is simple. The incentive here is to get big money to borrow more to buy assets and stock. As the market is plummeting there is no yield that is worth the risk. No one is buying and everyone is panic selling to take profit or just following the herd not trying to lose more money. Risk-off assets like gold are feeling the burn and also bonds are not seeing too much of a spike. With these low rates, there are still limited incentives to buy this knife. Until it settles down there won’t be much buying.

That is also dictated by the Coronavirus spread, how it affects employment, businesses and also earnings to come. We could see a lot of companies wiped out, unfortunately. Which leaves the Fed with little option. One of which is to start buying stock…

For more information on how you can take advantage of this downside, protect yourself and find other outlets to hedge your assets. Join TRADEPRO Academy where we trade this volatility in a risk intensive way!