Markets get hit, is this the beginning of a bear market? Trade talks continue…

Markets get hit, is this the beginning of a bear market? Trade talks continue…

What a week we just had inequities. Last week’s late sell-off had an influence on this week’s drop off. We saw the S&P 500 fall 4.1%. The Dow Jones 4.2% losing 800 points on Wednesday. The Nasdaq falling 3.7%, the futures were flirting with the 7700 levels before dropping under the 7000 level. There was much volatility in the market, which could’ve turned into a chop fest for day traders. The VIX spiked (30%) with this increase in volatility and those all-time equity highs seem to have come to an end.

Along with the US, equity slide came the foreign equity slide. The S&P 500 closed under the 200-day moving average, this was the first time it ventured into that territory since April. There was some blame placed on Powell for this drop off as the Fed hiked rates and made rather normalizing comments about the future of the United States economy. The trade talks between the United States and China continued to press the Yuan lower.

Equities were not the only things to slide this week as Crude oil took a sizable hit, down near 4% on the week. Crude oil inventories came on Thursday as we observed Columbus day in the United States. The inventories came out very bearish as we experienced the biggest build in 20 months, a near 2 year high of oversupply. Just a day before Crude oil slumped off a higher rig count than expected, another bearish number.

Earnings season kicked off this week with some of the major US banks, JP Morgan, Wells Fargo, and Citi Group. JP Morgan and Citi both beat earnings, but they still recorded red days as the equity drop continued. Wells Fargo missed heavily on its bottom line, continuing to cut costs, price slump significantly, closing relatively flat on the session. A tough time to release earnings as equities are in the midst of getting hit, but this is just the beginning of earnings.

OK, we might be getting overdramatic, It not like the markets of the world dropped so hard they feel through the core of the earth and end up on the other side. But this could just be the beginning of something larger to come. Dow and Nasdaq down over 2000 points combined! If that’s not something to pay attention to I don’t know what is.

Peter Schiff, American broker and CEO of Euro Pacific Capital might be looking at the worst-case scenario. But to every madness there might be a hint of truth, if we do end up in a dirty bear market dropping 20-30% maybe even more, we could see a similar sequence of events. Let’s not forget the drop in 2008, over 50% “retracement” in the market. If we crack under 30% this year, then that would be a sign of panic. This “little” hit global markets took cost about $6 trillion, give or take a few bucks.

The Fed seems to be the scapegoat of this drop off we just experienced. Everyone’s pointing fingers at the Fed and calling it names. Even going as far as to say that Donald Trump was right, fire the Fed! Powell is a respected man that knows if he hikes rates too quickly it could be detrimental, but some kind of hiking must be done to prevent the inevitable. His comments about the US economy did however spark some fear into people’s souls. It should be common knowledge that if the US economy takes the hit anticipated, the whole world will shake. But many seem to think that the Fed is viewed as “a massive artificial bank and market stimulant” (Nomi Prins).

GDP grew last quarter, but so did debt, the primary suspect in America. People are sweeping debt and what it really means under the rug rather than taking it seriously and that could be everyone’s demise. Consumer debt (household debt, credit card debt, student loan debt, and auto debt) is now at higher levels than it was in 2008 when the financial crisis struck. These are remarked as the four pillars of debt upon which the US economy is perched. Many believe that if one were to collapse, disaster could strike.

One moderately good thing that comes from this drop is a chance to buy gold! In this week’s drop gold jump from the $1186 (low) level on the futures up to the $1230 (high) area. That’s roughly a 3.6% jump from lows to highs. Gold considered a safe haven, could be set to make a bull run as the uncertainty in equities increases. Analysts could see gold spiking up to $1300 by the end of the year, a $70 dollar increase is not unheard of. There is even much talk of the US being stripped of the title “reserve currency of the world”. The chart below alone can explain why, just look at that growing debt, ridiculous! The last time there was a surplus was in 2000 when just before the Dot-Com bubble crash. All in all, this was not meant to scare people, just to open more eyes. 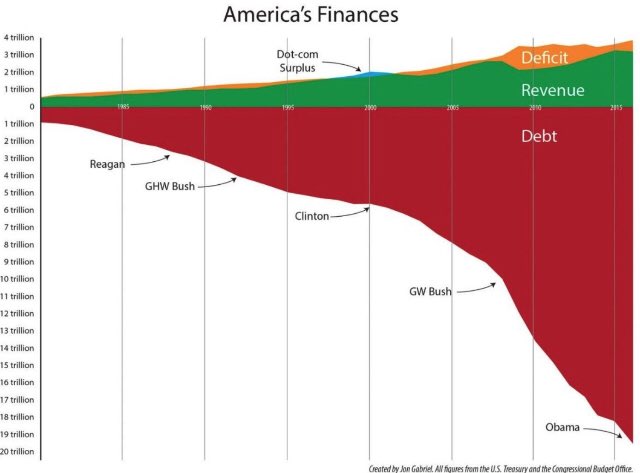 The ever-growing US debt. United States revenue is getting engulfed by the deficit as well. Credit to Gold Telegraph

The trade talks continue, of course. Trump is slapping tariffs left to right and center, while China appears to be waiting for the right moment to strike, or have they already? In recent news, Chinese car sales fall off and the worst is yet to come apparently. Production of cars in China is dropping, the trade war obviously isn’t helping that case. Neither are the Chinese locals apparently as dealership purchases fall (12%). This drop off in China is also affecting the rest of the world, GM, Volkswagen, and Honda are all effected as deliveries drop. Blame the US and the trade war I guess? The Yuan’s plunge is also ruining China’s mood.

But there might be some sunshine through all those smoke clouds. There is some evidence that the US is not “winning” the trade war. Let’s have a look at Chinese trade data and see what it means. The two countries’ stock markets might have a large gap in between them but that is not indicative of who is “winning” this trade war, or who is in a better position.

We’ve talked about the trade surplus time and time again, but let’s finally break it down. Chinese exports to the US jumped 14% year over year, while imports from the US fell 1.2% year over year! What?? This puts the Chinese trade surplus with the United States to a record high! Well, then how is Trump “winning” this trade war. With this apparent “crisis” building up in the United States we’ll see how trade talks shape up this upcoming quarter. When we dissect the numbers, it doesn’t look too pretty for America.

After last week’s low event showdown, this upcoming week we’ve gone a data-filled 5 days. There is a lot of foreign news, with a very important FOMC meeting midweek. It’s super important to see what the Fed says and thinks of this past week’s drop off. How will markets react to these meeting minutes?

Monday, pre-market movers out of the US, retail numbers. Canada has a BOC business outlook survey that could shake up the Canadian dollar. The last event of the day is out of New Zealand (CPI numbers).

Tuesday, Average earnings index out of the UK, watch the pound.

Wednesday, a heavy set day with CPI numbers out of the UK to get the ball rolling. Then midday the much-anticipated FOMC meeting minutes, after an over 4% drop across equities this week all ears will be on the meeting minutes. The day gets wrapped up with employment numbers out of Australia, watch the Aussie dollar.

Thursday, BOJ Kuroda speaks, retail sales out of the UK, EU economic summit out of the EU will stir up the Euro. The last event of the day is GDP data out of China.

Friday, to wrap the week up, BOJ has Kuroda on the wire, CPI data out of Canada, and BOE Carney speaks from the UK. The weekly economic events, highlighted in red so traders know what the high impact events are.

That’s all for this week, good luck and good trading. Manage your risk and trade like a TRADEPRO.