The Fed cuts for the third time! They have to be done!

A strong start for US equities and a strong finish to the week. The optimism out of the US/China trade deal and some clarity around Brexit with a mix of the Fed’s stimulus helped equities rally into all time highs. S&P 500 and Nasdaq rocketed through their previous all-time highs on global mark strength. The earnings season is coming to an end and continued strong amid the FOMC rate cut decision mid-week.  As expected on Wednesday, the Fed cut rates by 25bps and also signaled policy is now firmly on hold. Rates fell and the dollar weakened after Chair Powell said it would take a “material” reassessment of the Fed’s outlook to cause the central bank to alter policy at this point.

There was a blip in the US/China trade deal late in the week as risk-off sentiment grew strong on the basis that China was skeptical that a long-term deal would be hatched. On one side the Chile meeting was canceled and on the other there was little information offered from the development out of the deal from the White House. A better than expected jobs numbers report for the month of October helped some of the equity upside but the numbers were still not blockbuster.  Rates drifted marginally higher, recouping some of the post-Fed decision pull back, helped by a chorus of accompanying Fed commentary that solidified expectations that rate cuts are over for the time being. The S&P500 hit fresh all-time highs, rising 1.5% this week, while the DJIA gained 1.4%, and the Nasdaq added 1.7%.

The trade talk & the Fed in November.

What can we expect from the US/China trade talks in November? We were expecting to see a Phase 1 deal signed in November at the gathering in Chile for the annual Asia-Pacific Economic Cooperation (APEC). The meeting was set for mid-November, there was a lot of optimism around the potential signing of the deal. However, due to last-minute changes and ongoing street protests Chile canceled the meeting. Putting pressure on the signing of the China and US trade deal. Fear not, this did not stop markets from reaching all-time highs. This left Xi and Trump without a location for the signing, they may be meeting in Davos in January. That is a late suggestion because it’s after the soft deadline for the scheduled December tariffs. Macau is an offered spot by China but that won’t bode well with the White House. After this is all settled, Phase 2 can be put down on the table and the two sides can work toward the completion of the trade deal. An ongoing debacle.

The trade talks do not begin and end with China and the US. Trump is still in talks with Europe, which could spark the next global trade war. There is an expectation of a tariff imposition of 5% to 25% on foreign-produced automobiles by mid-November. This would hit the European economy as European automakers support nearly 13 million jobs or 6% of the EU’s working population. which could trickle down to the manufacturing sector, which has been suffering globally as it is. European nations have been teetering on the edge of recession as is and this could push them to the brink. Which opens the doors for European retaliatory tariffs on exports to Europe. A class China-US tariff war.

The Federal Reserve has now cut rates for the third time in a row, 75 basis points down already and its November. This is an attempt to keep the economic expansion going as they had mentioned on numerous occasions and to delay the proposed recession. There was a change in the tone regarding the monetary policy from the Fed after this last insurance cut. Fed Chair Powell announced that the “mid-cycle adjustment” was now over and they will assess data in the coming months to make a decision, rather than saying they will do whatever it takes to keep the expansion going. This is the first time the Fed has cut at all-time highs and the fact that anything over a 75 basis point cut in a single year usually precedes a recession. Meaning the Fed will most likely not act if the economy continues to grow as expected (New York Fed cut Q4 GDP growth), inflation remains around the 2% target and further uncertainties do not arise.

Powell made clear that it would take a “material reassessment” of their outlook to cause the Fed to change policy at this point. That announcement was enough to put traders and investors at ease for the immediate future, knowing that the Powell Put is still in play. We’ll see what it takes to squeeze further easing out of the Fed, but they are running out of bullets should something go cataclysmically wrong.

The Fed announcement and Non-farm numbers are over and done with from last week. This week we have a quiet economic calendar in terms of US news, however, there is a lot on the overseas front to watch out for.

Sunday, Retail sales out of Australia

Monday, ECB President Lagarde Speaks, newly appointed with Draghi out. The Cash rate and rate statement out of Australia as well.

Tuesday, Trade balance out of Canada, ISM non-manufacturing PMI out of the US. Employment numbers out of New Zealand.

Friday, Employment Change and Unemployment rate out of Canada. 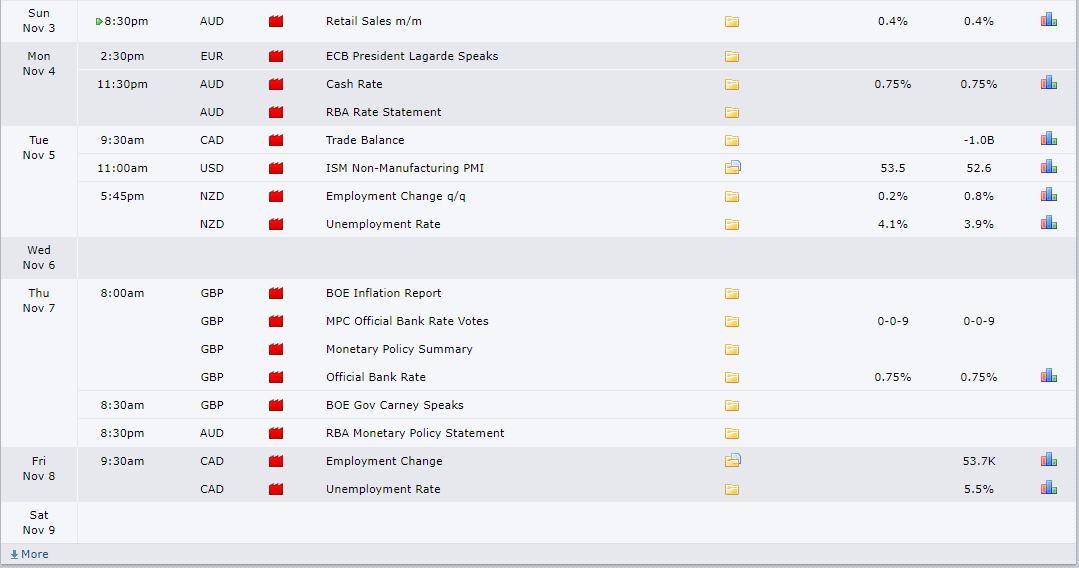