TRADE DEAL IS ON! China and the US tie the knot.

US equity markets moved slowly to start the week due to the uncertainty of the coming trade deal signing, would the US implement the tariffs scheduled on December 15th or not? The expectations were that tariffs would be delayed even without a formal trade deal signed. It was unlikely that Trump would hit consumers with higher prices right before the holidays. On Thursday many reports came out that the agreement would be signed and positivity sparked through the markets, US equities rallied and government bond yields did as well.

Throughout the majority of the week, the uncertainty of the trade deal caused markets to stall sideways in anticipation even though other high impact news reports were released. The US, Mexico, and Canada reached the USMCA deal which is to replace NAFTA. There was also a rate decision this week in that the Fed left rates on hold as expected with little guidance on the Repo rates, Quantitative Easing 4, and the future of the rate decisions. They said that the US should expect to see rates on hold for 2020 as it stands. The ECB with new President Lagarde took a dovish stance as well. While the UK left Boris Johnson with a majority government that looks like its going to accommodate Brexit by the January 31st deadline.

By Friday, China held a press conference that confirmed the progression of Phase 1 of the Trade deal. China and the US are now set to sign Phase 1, but the date has not yet been confirmed. In other news, OPEC’s last week’s production cut announcement caused energy stocks and oil to move higher, they were also affected by the trade deal with the two nations.

A busy week ahead after the FOMC announcement this week and trade talks, we’re getting ready to wrap up the year and there is little new out of the US this coming week.
Monday, Flash Services out of Germany, France, the UK, and Manufacturing PMI out of Germany, the UK, and the US. Bank Stress test out of the UK, New Zealand has ANZ business confidence and Australia Monetary policy Meeting Minutes.
Tuesday, No high impact news.
Wednesday, ECB Lagarde speaks, CPI data out of the UK and Canada. New Zealand releases GDP numbers. Australia has employment numbers. Japan released a tentative monetary policy statement.
Thursday, retail sales, MPC official Bank Rate votes, and Monetary Policy Summary out of the UK.
Friday, current account from the UK and Core retail sales out of Canada. 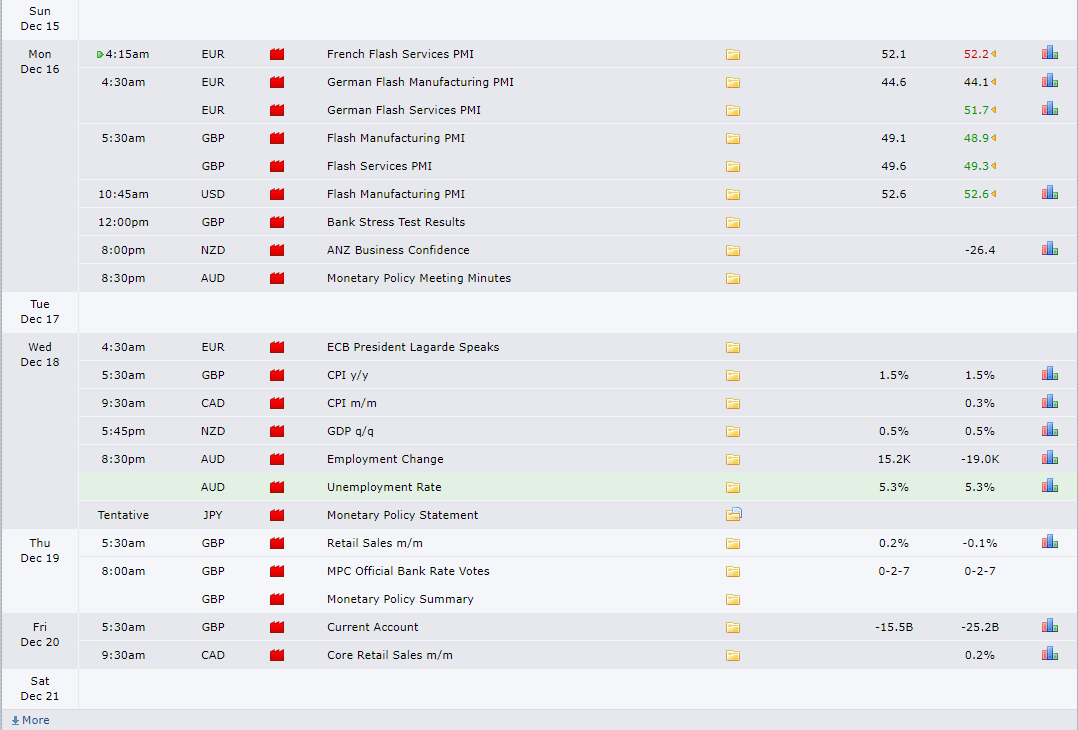