Trade optimism, Markets rally…Are we on course for fresh highs?

A weak start led to a strong finish in US equity market this past week. The trade talks continued on Monday, there was much optimism built around the continued trade talks later in the week however officials had different plans. By Wednesday, the Trump administration announced a surprise expansion on the black list accumulated for Chinese companies with a visa ban tied to human rights violations by the Chinese government.

That news was quickly dissipated by continued trade optimism of a potential preliminary deal being reached. A skinny deal was in the talks and the US would hold back on raising tariffs this month if China would agree to some kind of currency regulation deal. The currency regulation was a pretty far fetched proposition from the Trump administration, that calls for an almost immediate loss on China’s behalf of the current trade war. The currency pact was not the only thing that the US was looking for, along with IP protection framework and the continued agricultural purchases. Trump and China Vice Premium Liu met on Friday and collaboratively confirmed the first phase of the trade deal, which will be presented and written over the next few weeks. This will lead into phase 2 and 3 of the negotiation although we still do not anticipate a trade deal before the 2020 election.

Economic data came out of the US this past week that partially disappointing but was not enough to ruin the good trade deal talks. CPI came within market expectations and the PP numbers were a slight miss. The Fed was under the microscope again as Fed Chair Powell hit the stand, saying that the Fed will remain data dependent as always and that the Fed will continue its expansion of the balance sheet, buying $60 Bn worth of Treasuries a month. There were FOMC meeting minutes this past week, there was little surprise or market movement from the minutes as we anticipate the Fed rate decision at the end of the month. The rate cut is almost price in for October 30th, while there is debate within the Fed of what stance they should take as a collective.

News out of the UK continued as we approach the Brexit deadline. The pound rallied the most we’ve seen in over 6 months as the British and Irish PMs met yielding new concessions from the UK that could lead to a resolution.  Turkey launched an offensive against Kurdish fighters in Northeast Syria after President Trump decided to withdraw US forces from the region, a choice that drew the ire of many Republicans in Congress and prompted Trump to threaten new tariffs that could “destroy” Turkish economy. As the trade deal made progress, Treasury yields rose throughout the week, and equities rose modestly, with the S&P up 0.6%, the DJIA gaining 0.9%, and the Nasdaq adding 0.9%.

A quieter week in global markets are expected. We can see movement from unanticipated US/China trade talks however there is nothing scheduled. The main events to watch out for are the US numbers late in the week and the Chinese GDP numbers on Thursday.
Monday, Australian monetary policy meeting minutes overnight will move the Aussie dollar.
Tuesday, BOE governor Carney goes on the wire, China releases new loans and New Zealand releases CPI data.
Wednesday, CPI numbers out of the UK and Canada. US has retail numbers out and Governor Carney speaks again. Australia has employment numbers releases.
Thursday, retail sales out of the UK, Philly Fed numbers out of the US and crude oil inventories, finishing the week on GDP China numbers. 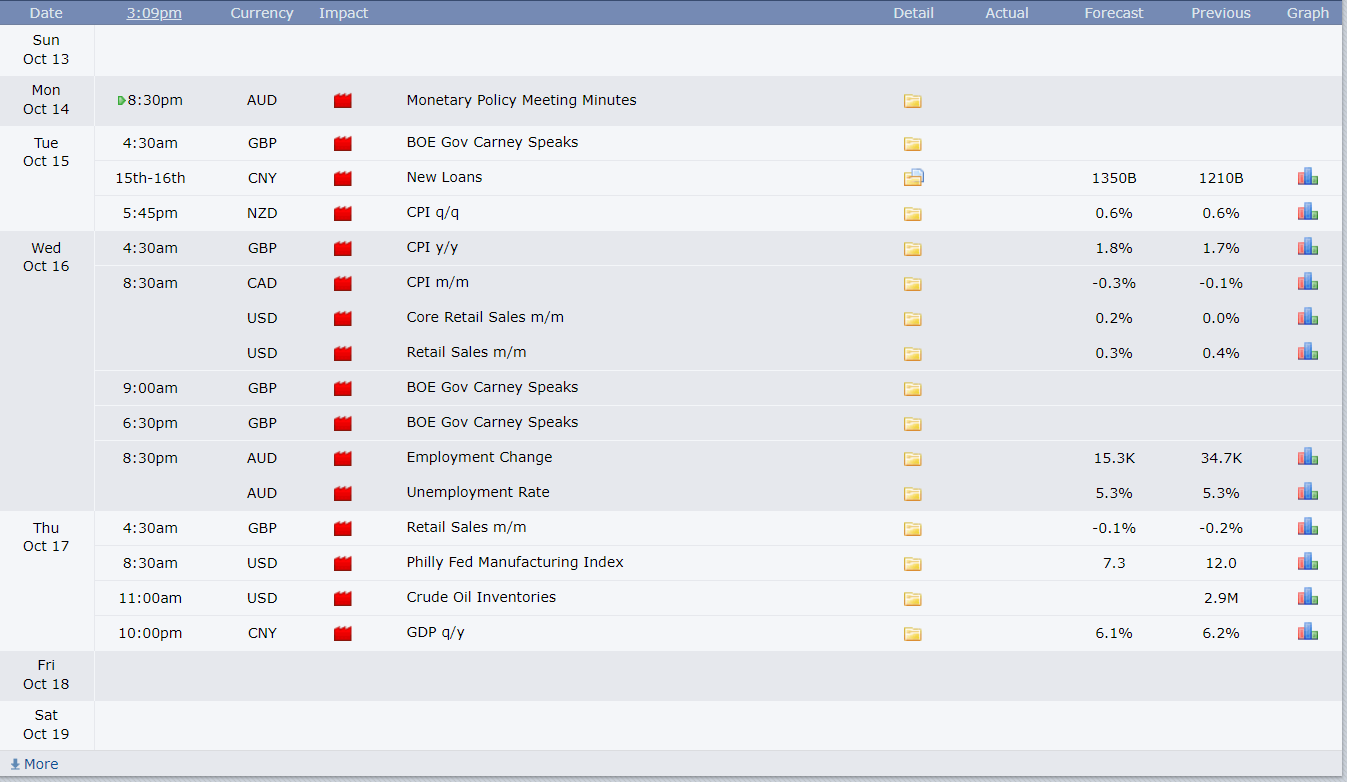