Trump to save the US market bubble from bursting?

The end of a four-week long losing streak came as trade talk optimism came to the markets. No real tangible news yet, however China and the US are still talking. Even though a new round of tariffs just came into play on September 1st 2019. These days any glimmer of good news is good for markets when it comes to the trade war talks. Beijing continued restraint over the political situation in Hong Kong, which saw some leaders of the protest arrested last week. Trump was relatively quiet on commenting on China this week, putting most of his energy on the Fed. He was also very stern on “weak companies” that blamed their poor results on the recent tariffs rather than their “bad management”.

Economic data from the US remained relatively strong as the second reading on Q2 GDP came out at a solid 2%. Later on in the week we saw a slight slip form the consumer confidence report from the U of Michigan. This was the largest monthly drop in over 6 years.

Economic data out of Europe was different as German monthly CPI data fell below expectations. Not to mention the shock that came from ECB’s Knot this week that effectively announced that QE stimulus is not needed for the time being. Also mentioning that the EC policy decision in September is “overdone” which prompted the announcement that the ECB should halt QE.

This week, in final economic news from Europe, PM Boris Johnson from the UK dragged the Queen into the whole debacle. Asking for her permission to suspend Parliament for a month to further drive toward a “no deal” Brexit. The deadline is October 31st, creeping up on us all.

The US Stock Market Bubble, can Trump save it from popping?

It all circles back to the trade war and the presidents of the two largest economies in the world. So far it seems that Trump has been doing anything in his power to keep the markets afloat as the presidential election is on its way. He is trying to “win” dead-end trade war and to keep markets from crashing, by jawboning the trade negotiations, and by cutting rates as markets trade near all-time highs.

What people are missing are the cold hard facts, Chinas economy continues to slow down and economies around the world are beginning to slow. It’s not a recession until we see two consecutive negative GDP quarters, however slowing is the first step to that.

The TPA prognosis for a while now has been that the trade deal between China and the US is likely dead, recent actions by both nations have further solidified that. This trade deal can be milked for years to come, and it seems that Trump plans to keep it in talks until the US election, along with the market near highs. The result? Re-election. If the markets slump and we enter one of the most bearish markets ever seen we will be saying “Goodbye” to Trump.

The Fed and Trump have had a somewhat rocky relationship and it continues to diverge. The Fed has been cutting rates and will do so for the foreseeable future as per Trump’s request. However, he is still not happy because the Fed has not been cutting rates as aggressively as he wanted them to. A rate cut is supposed to bring more money into the markets and push equities higher.

This time around rate cuts have brought markets lower, why is that? They’re insurance for the recession to come, this brings fear into the market. The Fed is cutting right now to mitigate the recession ahead, this is a little premature though. When markets drop 45% and the Fed has 1.00% to cut, they will be forced to NIRP.

Economic data has yet to identify a potential recession, unemployment is at all-time lows, GDP is still not negative but growth is slowing. It’s different this time around, compared to 2008, the debt levels and asset bubbles are far greater this time around. The bounce back in the world’s economy from 2008 came from excessive debt use. Chinese property growth and US stocks growth has lead the rebound of the 2008 crash. US stocks are grossly overvalued, only compared to historic measurements. Now the US market is 150% over the GDP. While Chinese property is 4-5 times greater than GDP value.

How is Chinese debt backed? The property, debt is now 3x GDP. China, now seems to be adjusting their whole property market which contributed to the economic slowdown. The global difficulties don’t end there. Germany has negative yields on its long-term debt assets, collecting money for issuing debt… Something that has not been seen in a long time. Which is making Trump jealous of their extremely low rates. Not realizing that this is extremely unsustainable which could lead to the collapse of the whole market. Europe’s banking system is in hot water and Italy is looking like one of the closest markets to the tipping point.

Before we talk about US rates, Trump is in the middle of a lot of action. He was trying to leverage the potential trade deal in 2020 to see if markets would rejoice, no dice. He has since resorted to cutting rates and talking about payroll tax cuts. He’s really pulling ideas out of a hat. The immense debt leverage that has been accumulated over the past 10 years globally is going to make it really hard to climb out of this recession.

Central banks are up to bat, they’re job is to flood the market with money during the recession which leads to more debt, another bubble and the cycle repeats. Is there a redo button?

Below we have the 2,5,10,30-year yields compared to the S&P 500. The left part of the chart identifies all of these assets. The green line is the S&P 500. The black to light grey lines are the 30-year, 10-year, 5-year, and 2-year respectively. From dark to light. We’ve talked about the correlation time and time again and the distance between yields and the equity market continues to widen.

For everything to revert back to normal, we need to see either bond yields rally aggressively on average 45% up to the S&P 500 growth. Or we will see the S&P 500 drop roughly 45% to catch down to the bond yields, this is the more likely situation.

Below we have one of the most-watched indicators by investors for the potential downside in US equities. The inversion of the 2 and 10-year yields means that now the shorter-term yields have surpassed the medium term in return. The low level just printed on August 27th, 2019 was -0.054. Which means that we are nearing the -0.14 to -0.16 lows that preceded the 2008/09 financial crash. Before that, we saw -0.45 just before the Dot Com bubble crash. Into the recession, we typically see a drastic climb in the yield spread. There is still more potential downside in the 2-10-year before we start to increase fear. The spread can maintain below the 0.00% level for a while before the recession talk becomes real.

It’s official the 30-year US yield has dropped to a new low hitting 1.90%. We are not that close to the NIRP level that Germany has gone through. This is worrisome as we continue to print lower lows.

The summer markets have finally come to a standstill and institutional money comes into the market yet again in the first week of September. With that, we anticipate a lot of high impact from all over the world. Limited news from the US, however as we come into the September FOMC announcement to cut rates (expected) all eyes will be on August jobs numbers.

Monday, Retail sales out of Australia.

Tuesday, News continues out of Australia with cash rate and RBA rate statement. This will move the Aussie dollar a lot, keep an eye on the currency. US ISM Manufacturing data in the morning along with Australia GDP at night.

Wednesday, Trade Balance, BOC rate statement and the Overnight rate out of Canada set to move the Canadian dollar in the morning.

Thursday, ADP non-farm employment Change, and crude oil inventories out of the US.

Friday, the event of the week, jobs numbers out of Canada and the US, the US numbers are going to be more of the market mover pre market. 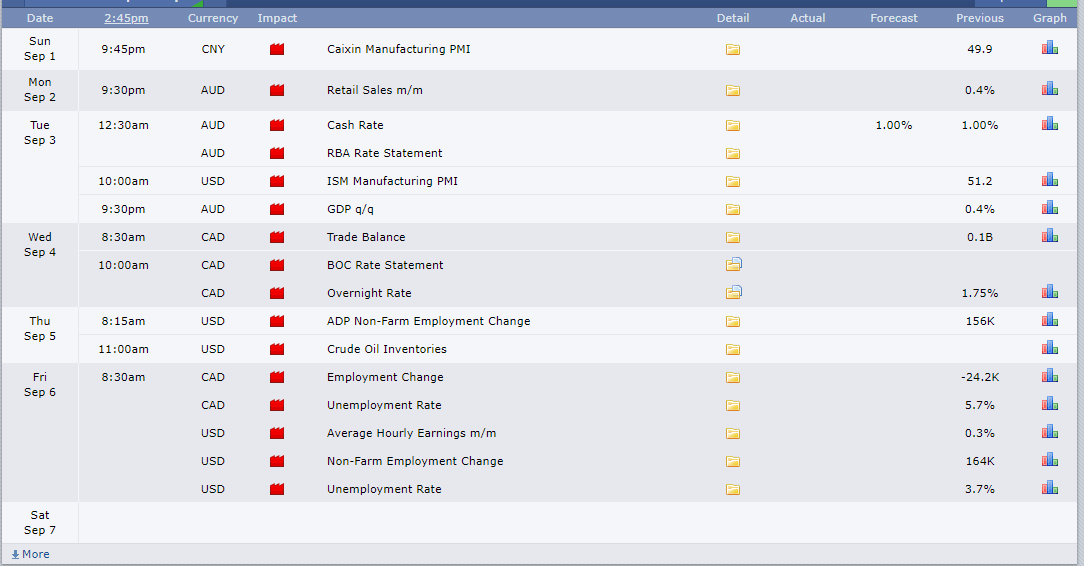