Using this strategy and technique we are going to break down how you can find those crazy stocks that run 20%+ in a single day! So this could be used for options or stocks.

What is the short float? How does short float relate to short interest?

A stock’s “float” is in reference to the total number of tradable shares in a company’s stock. The short float or short interest are interchangeable as the total number of shares of a particular stock that have been sold short by an investor but haven’t been closed out yet. These are opened shorts and they can be represented in a percentage. When expressed as a percentage, the short float or short interest is the number of short shares which is divided by the outstanding shares or the total float.

Now, the short-interest or the short float would simply be taking the two million that have been shorted and dividing it by the 10 million that are totally in the market which would equate to a 20% short float. Meaning that this is a relatively high short float and there is a potential for what we call a short squeeze.

Most stock exchanges track the short interest in each stock and it’s reported towards the end of the month and some stocks actually report the short interest or short float twice a month so we get a rebalance on the short interest that could drive us to see which stocks may be in for a short squeeze. Here is a great website to track a stocks shot float: https://www.highshortinterest.com

What is a short squeeze?

If your short selling stock as an institution or trader and the stock keeps rising rather than falling. As a short seller, you sell a stock at a price in the anticipate that you will cover for a lower price! On the rise of that stock, you will want to start covering your position as per risk management (not to lose more than anticipated).

Short sellers naturally want to see the position or the stock itself drop for them to actually gain money because if you think about it technically a stock can rise infinitely so if it passes that threshold barrier of your break-even and it starts going then you’re going to want to start covering.

Generally, you see the short squeeze more often on smaller cap stocks. There are also massive market cap stocks that get short squeezed as well so that means if a stock in question has a very high short interest or a short float through a certain threshold percentage that stock is going to be forced to liquidate and cover its short position by purchasing the stock and that short squeeze happens or a buy stop. To learn more about How to Find a Short Squeeze with Options Open Interest follow this one.

What is a high short float?

A large short float, by standards, would be considered anything above 15%. However, if you’re looking for a higher probability short squeeze, consider stocks with a short float of 20% and over.

The strategy explained starts off with FinViz (a website that helps you screen names based on criteria).

Take a look at the image below. Based on the criteria we listed we have found 304 names that meet that criteria. You can further filter the data based on Market Cap and optionality if you would like! 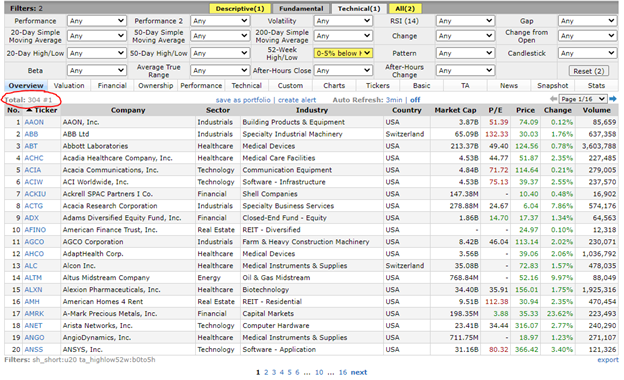 There are more filters to be added if you want to drop down the number of results. In a filter, you can add a short float of over 20% or even 30%. Based on that filter we have found one single name. Which is SeaLimited (SE).

Take a look at SE below, 20.8% short float and the stock is near a top which means the short squeeze can happen pretty sharply and fast. The intraday chart on the 1-hour reflects that for a structural breakthrough the tops. The next level to break as per the chart below is 240 to run higher. 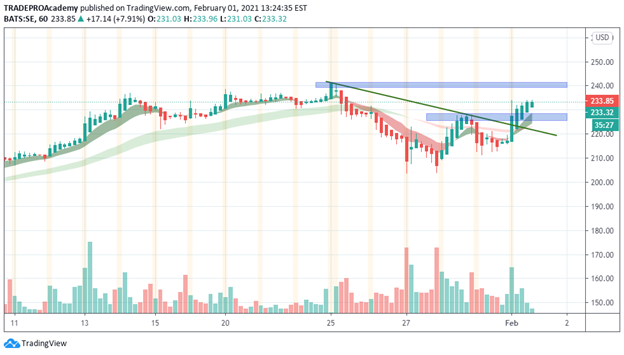 What happened to GME? How was there a short squeeze over 100%?

That means that shorts borrow those 50 million shares and sell them right and then the other 50 million are sold shares that end up with institutions that participate in other stock lending programs so shorts borrow those and sell them again and you can continuously borrow and continuously short and continuously lend it’s a very interesting concept. Once you start passing thresholds like that it gets pretty aggressive and you can see an aggressive short squeeze that could last several days.

Which is what happened with GameStop (GME), with a short float of over a hundred percent for multiple days this stock started off at about $20 a share on January 13th. Just a day later we saw the short squeeze start which ramped up on January 22nd. We then made the move from about $40 to over $500.

This happens when about 140% of the float is shorted in a company and through a threshold level that seems like it was around $40. Through this area, we saw the start of the squeeze and the shorts started to cover. What happened with GME was a combination of a short squeeze and a gamma squeeze.

There are a lot of names that have high short floats that you can analyze for huge runs in the coming weeks and months. One name that really sticks out is FUBO. Take a look at the chart of FUBO below.

We pulled back to a key level on FUBO from a prior broken top where on the intraday buyers came through. Fubo has a short float of over 70%. It is trading near tops as well for the break higher. 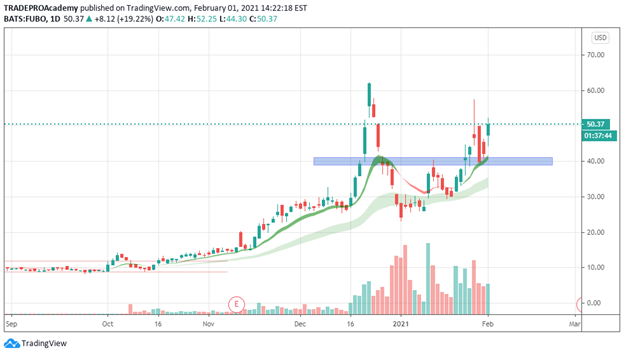 A few more names that you can watch for throughout 2021 for a short squeeze are the following: 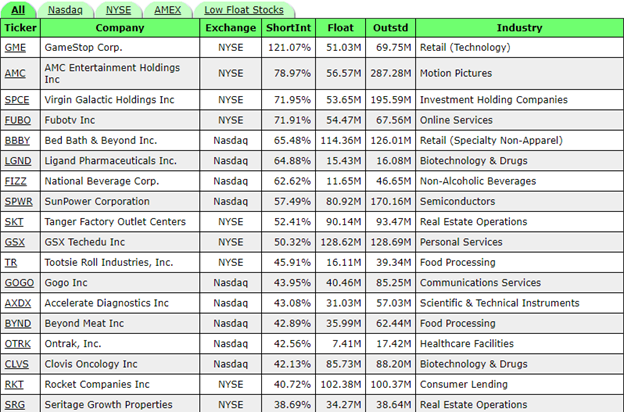 Careful with short squeezes and highly shorted stocks, you want to wait for a breakthrough of tops to confirm that the upside is actually coming out. There is a lot of potential to the upside but for that to happen you need a trigger point where you are expecting to see the buyers come through the market.

To learn more about this you can join a community of well-versed traders that do this on a daily basis and a plethora of education, you can join TRADEPRO AcademyTM! Where we trade stocks and options daily!

Join us at TRADEPRO AcademyTM to learn how we take advantage of this strategy each morning during the US market open. There has never been a better time to make the investment in yourself!